Is the government that strapped for cash?

The government has invited Payday lenders to a meeting next week, which got me wondering how much they needed to keep going for another month or so.

But with Payday loans demanding interest rates in the 4,000% – 5,000% bracket the national debt would spiral out of control within hours not weeks or months.

The Payday lenders have actually been summoned to a meeting with the Consumer Minister, Jo Swinson, as well as charities and regulators says the Telegraph in order to sort out the problems endemic in this rather sordid 'industry'.

And it's not before time!

How can it be that 7,000 people that contacted the charity StepChange alone last year had FIVE or more of these loans? Can you imagine the interest racking up on those. And as far as those borrowers are concerned the few tens or hundred of pounds involved will become thousands and within a short time rival the national debt, or as good as as far as the debtor is concerned.

Payday lenders have come under constant attack for some of their dubious practices. The executive Director at Which? said that it was pleasing to see the government addressing the issue and Martin Lewis the founder of MoneysavingExpert.com called these companies a 'scourge'.

But politicians need to understand that the reason that many people are resorting to these 'businesses' is that they need money now, to feed themselves and maybe their children today. So they have to sign on the dotted line or maybe hope they qualify for a food parcel. At least the weather is tolerably warm so these people don't have to go freezing cold too.

With more public sector cuts on the way this can only get worse. Not that I'm saying we don't need to slim the state because we do.

But this puts the strain on a greater number of vulnerable people, so what are they to do? Starve? 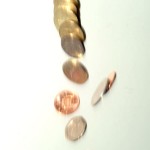 These people also have no assets to speak of, except maybe a car. So when those in difficulty keep rolling the debt up month on month until it is totally unpayable then default, the only recourse the lender has are threats and constant harassment by phone and doorstep. Because going to court will probably not be cost effective and just have the judge saying that the borrower can't afford more than say a quid a week.

The economy is in a mess and its not getting better any time soon. And as usual the poor and vulnerable are the ones who are going to pay with stress, hunger and health problems while the extremely wealthy individuals and companies hide their money from the taxman and claim it's not their business.

But as Jacob Marley said to Ebenezer Scrooge when he made his ghostly appearance, "Business? mankind was my business".