Today’s UK data showed further positive signs from the UK labour market. Unemployment fell by 7,000 in the three months to July, but still left the total number at 2.59mn. That was enough to nudge the unemployment rate down to 8.1%, from 8.2% in the previous three-month period. It was not all good news though – the number of people taking temporary or part-time work, because no full positions were available, increased by 73,000, taking it further above 2mn.

The big picture, though, is that the UK labour market is holding up pretty well. Many economists think this is puzzling – in the past, when the economy is in recession we normally expect firms to cut wage bills by firing workers. This doesn’t seem to be happening this time around – or, at least, not to the same extent as in previous recessions.

So what is going on? Some economists think the strength of the labour market is the proof that official activity (GDP) data are too low and will be revised up. Others worry about a permanent shift in productivity growth. Occasionally, an especially honest economist will admit that they don’t really know what is going on.

Personally, I wonder about a slightly different question. Any ‘explanation’ of the reasonably robust labour market (falling unemployment) versus the dire activity data (a shrinking economy) pre-supposes that there is a puzzle to explain. But I’m not sure that’s true.

The big picture is that we are still recovering from the worst banking and financial crisis in a generation, and after a promising start in 2009 the recovery in UK GDP has now been worse than during the Great Depression. By most reckonings, the banking crisis has hit potential supply – broadly speaking, the amount of national income that we should expect to generate if everyone who wanted a job at the going wage got one, and we all worked normal hours (and effort). This will have a long-term impact.

Estimate vary, but a ballpark figure is that the crisis may have knocked 10% off potential supply. At the same time, the impact of the crisis on the equilibrium employment rate – the proportion of people who would be expected to have jobs, once all the shocks hitting the economy have resolved themselves – is probably unaffected. This means that, in the long run, national income (or output) per worker will be around 10% lower. The corollary of that is that the real product wage – how much spending power workers have, based on companies’ selling prices – also has to fall.

Quite how this adjustment happens depends on monetary policy and workers’ responses. If we all resisted the fall in the real wages, unemployment would rise pretty sharply and then wages would fall gradually as the pressure of applicants for jobs hit salary levels. On the other hand, if we all took a 10% pay cut immediately, most of the adjustment could be out of the way pretty quickly and few (if any) jobs need be lost. For what it’s worth, I think we’re somewhere in between these two outcomes.

The long-run implication of both is the same though – in ten or twenty years’ time, output per worker will be 10% lower than if we hadn’t had the crisis. If we saw the sudden drop in salaries, then the drop in labour productivity would be equally sharp (as we’d be employing the same number of people, but producing less output). If the transition happens via high unemployment, the productivity adjustment would be very gradual; disruptions in the labour market can take a long time to sort themselves out. 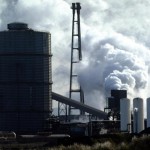 If we’re in the middle of these two paths, then what we should expect to see is a prolonged period of weak labour productivity growth. Output (GDP) should rise by less or fall by more than employment for a number of years. And it turns out that this is exactly what we’ve seen. Output per worker in the UK is around 3% lower than it was at the start of 2008. If the 10% impact on supply is right, this suggests that we’ve got further to go – depending on how you account for developments since 2008, we might be about halfway there. But with half still to go, labour productivity could remain weak for several years yet.

However, that weakness isn’t a puzzle. It just reflects the fact that not all of the structural adjustment in the economy has come through yet. In some sense, it’s encouraging that we might be halfway there. Economists, meanwhile, need to sort out the difference between the cyclical moves that we normally expect with recessions, and the long-run structural adjustments that have to happen as a consequence of the crisis.

EU Referendum: One year on

Why I have little sympathy for Asia’s whinging