Is This Currency Losing Its “Safe” Status?

Not too long ago, I wrote about an economic slowdown in the Canadian economy and how it could take the value of the Canadian dollar even lower. (Read “How American Investors Can Profit from the Canadian Economy’s Demise.”) By no surprise, the Canadian dollar (also referred to as the “loonie”) looks to be in a freefall. Take a look at the following chart.

The Canadian dollar is currently trading at its lowest level since September of 2009. Since the beginning of the year, the loonie has declined more than four percent compared to other major global currencies.

Considering all that is currently happening, can the Canadian dollar go down any further?

Simply put, yes, the Canadian dollar may still see some more downside. After the U.S. economy showed a significant amount of stress during the financial crisis, investors flocked to buy the Canadian currency. This may not be the case anymore. 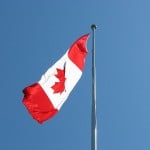 Flag of Canada by Andrew Tawker

First of all, wholesale sales in Canada in the month of November remained unchanged from the previous month. Out of the 10 provinces in the country, only four reported an increase in their wholesale sales. (Source: “Wholesale trade, November 2013,” Statistics Canada web site, January 21, 2014.) Wholesale sales can provide an idea about the retail sales and, ultimately, the demand in the economy. If sales remain unchanged or decline, it suggests demand is slowing.

As well, inflation in the Canadian economy is subdued. This has the Bank of Canada worried. In its January monetary statement, the central bank said, “…inflation is expected to remain well below target for some time, and therefore the downside risks to inflation have grown in importance.” (Source: “Monetary Policy Report Summary,” Bank of Canada web site, January 22, 2014.)

To take advantage of this situation—the Canadian dollar falling further—investors may be able to profit by shorting exchange-traded funds (ETFs) like CurrencyShares Canadian Dollar Trust (NYSEArca/FXC).

Remember: always use proper risk and trade management techniques in order to keep your losses small and your gains large.

This article Is This Currency Losing Its “Safe” Status? by Mohammad Zulfiqar, BA was originally published at Daily Gains Letter.