It's booming and busting: construction industry tops most searched companies in 2015

New analysis by Creditsafe reveals eight of the 10 most searched for UK companies on the Creditsafe system in 2015 operate in the construction industry or are specialist suppliers to the sector.  Five of these firms directly work in property construction and development, while three are specialist retailers servicing the industry.

While the UK construction sector has enjoyed a resurgence this year, with new companies established at a much higher rate than mainland Europe, it remains a volatile industry.  In March last year the UK's third most searched for company, GB Solutions Limited was placed into administration, which the firm's directors blamed on a cash flow issue.  In addition Fairhurst Ward Abbotts (sitting at 10 in the annual most searched rankings) also called in the administrators this year because of "severe cash flow difficulties".  The firm was prominent as it held a royal warrant as builder and decorator to the Queen. 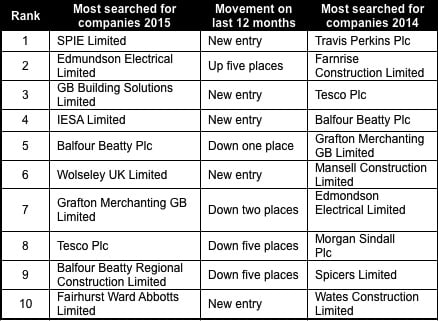 "The construction industry is one of the most difficult to evaluate as firms rely on a constant influx of new contracts, so companies that file profitable accounts one year can soon find themselves in difficulty the next.   The collapse of GB Building Solutions graphically exemplifies the importance of continual credit referencing.  While the group had historically traded profitably, cash flow pressures forced it into administration leaving an alleged £30 million trade credit shortfall.  The industry is heavily reliant on trade credit so it is vital that suppliers to construction firms continually monitor payment performance and company ratings to avoid potential losses."

Number one most searched:

Number one on the "Creditsafe Most Searched Companies 2015" list was SPIE UK.  SPIE UK is a subsidiary of SPIE group, a provider of energy, safety and environmentally focused solutions across multi-technical and support services.  Searches spiked for SPIE following the IPO of its French parent company in June this year, which valued the company at around €2.5 billion. SPIE UK employs more than 3000 staff from 31 regional offices throughout the UK.

Three of the top 10 most searched companies in 2015 sell construction materials: Edmundson Electrical Limited, Wolseley UK Limited and Grafton Merchanting GB Limited.  These firms service an extremely volatile industry where changes in demand are often felt before other sectors of the economy.

Tesco continued to find itself in the top 10 most searched companies in 2015, the only supermarket on the list, after once again delivering an underwhelming financial performance.  In December reported losses at the company's Giraffe chain of restaurants increased to £4.1m as a result of expansion and writing down the value of a number of sites.  Gross profits reported by Tesco fell this year and a number of subsidiaries have struggled.  NutriCentre and Harris + Hoole both reported losses this year, heaping additional pressure onto Tesco's senior management.