It's in the blood – A stylish and chilling teaser for Stoker

Korean director Chan-wook Park is perhaps best known for the cult favourite Oldboy (2003), a thriller which itself is soon to be given a given a new lease of life with a forthcoming and inevitable Hollywood remake.

The film maker has thus far built an almost devoted following based on stylish cinematography and often quite brutal subject matter with his talents inevitably leading him Stateside and the impending release of Stoker, an eerie and gothic chiller that has already caused more than a stir at the recent Sundance Film Festival.

Selecting a cast from the top drawer, Park has teamed with Nicole Kidman, Matthew Goode and raising starlet Mia Wasikowska for what promises to be an unsettling and seemingly perverse viewing experience.

In the wake of her father's death and as the troubled relationship between mother and daughter disintegrates, India Stoker (Wasikowska) will witness the dynamic of the family household changed forever with the arrival of a mysterious uncle into the fold.

And while Charles Stoker (Goode) experiences more than just cordial terms with his deceased brother's wife, the stranger and his darker characteristics will begin to influence his introverted niece who seems destined to inherit if not join her uncle in the family attraction to all things homicidal.

Kidman and Wasikowska seem almost ideally paired as estranged mother and daughter respectively with Evelyn Stoker seemingly the latest in a sideline of interestingly detached, eccentric and occasionally homicidal characters (The Others and To Die For) brought to the screen by Kidman.

Wasikowska promises to give her inquisitive wallflower turned serial killer a deadpan and sucluded nature whilst the combination of teenage awakening and murder echoes the themes and performances found in the cult favourite Heathers (1988).

Creepy and oddball alongside his new found role as mentor to an unknown niece, Uncle Charlie as portrayed by Matthew Goode seems destined to create an unsettling presence whilst sharing much in common with the central character portrayed by Joseph Cotton in the seminal Hitchcock thriller Shadow of a Doubt (1943).

Park has previously examined the vampire myths with his feature Thirst (2009) and it is probably no coincidence that the arrival and subsequently almost hypnotic effect of Charles Stoker upon both mother and daughter display a vampire like tendency. A trait that may justify the use of a family name that has become associated with the most famous creation of the horror genre.

As for the footage on display via the teaser, Stoker promises to be a stylish and provocative affair with cinematographer Chung-hoon Chung providing some lushly lit moonlight imagery that seems perfectly suited to the gruesome nocturnal habits and deeply introspective nature of the Stoker clan.

So degenerate twisted thriller or alternative coming of age story?

Stoker may well be destined to divide audience opinion upon its impending release but is most definitely one to watch out for.

Stoker is screening across the UK from 1st March 2013. 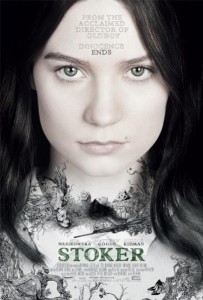 A preview of Fassbender's Shame

Is It Me? Or Is ‘Larkrise To Candleford’ Turning into the Wicker Man?