The retail sector is fierce and competitive, and the reality is that in this sector, a bad move or investment strategy could set a company up for continued miscalculations down the road. Of course, Blockbuster is a classic example.

However, my modern-day example of a total screw-up in the retail sector is J. C. Penney Company, Inc. (NYSE/JCP). The company is a perfect case of continued miscalculations and just horrible decision-making that could inevitably bankrupt this century-old American retail icon, sending it in the direction of Blockbuster to settle in the retail graveyard.

The chart of J. C. Penney below shows the horrific damage caused by its poor execution in the retail sector, which makes the events in Congress seem trivial in comparison.

The crossing of the 50-day moving average (MA) below its 200-day MA in December 2012 (as shown by the shaded sideways oval on the chart below) was a good indication that the worst was yet to come, based on my technical analysis.

Just take a look at the subsequent decline following the “death cross” on the chart, especially the major fallout from the $15.00 to the $6.00 level in just a matter of weeks. 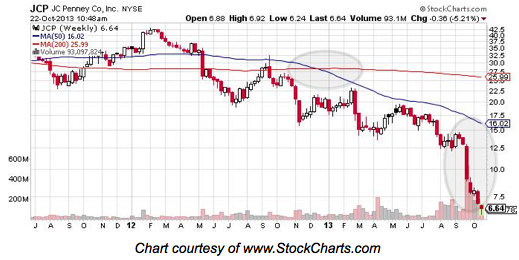 Execution in the retail sector tends to be more critical than any other sector.

Take high-end handbag maker Coach, Inc. (NYSE/COH), for instance. The luxury brand stock has been struggling against its high-end rivals in the retail sector, but so far, it’s seen a difficult run. 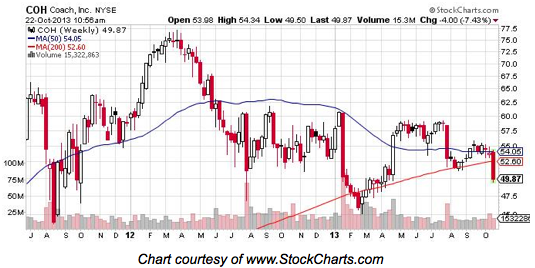 Coach reported a horrible fiscal first quarter, in which sales fell one percent year-over-year. The key comparable store sales plummeted 6.8% in the North American retail sector. The positive was that Coach was able to continue to expand its sales in China, with comparable store sales growing in the double digits.

Going forward, the sales growth, while positive, pales in comparison to rival Michael Kors Holdings Limited (NYSE/KORS), which I continue to believe is the “Best of Breed” in the luxury apparel and accessories area. The stock is up 35% since I last featured it in these pages. (Read “Why Michael Kors Outdoes Other Luxury Stocks.”)

Coach is estimated to grow its fiscal 2014 sales by 4.4% and its fiscal 2015 sales by 7.2%, according to Thomson Financial. By comparison, Michael Kors is near its 52-week high and sizzling on the charts.

A maker of high-end clothing and accessories, Michael Kors has beaten earnings-per-share (EPS) estimates for the last four straight quarters. Sales in fiscal 2014 are estimated to grow at a whopping 36.9%, followed by 24.3% in fiscal 2015, according to Thomson Financial. These metrics are far superior to Coach’s, and that’s why Michael Kors deserves its higher market valuation in the retail sector.

Coach needs to get its act together in North America, but it’s not going to be easy, with Michael Kors in its path and not letting up on the accelerator.

For investors, your best bet may be to consider sticking with Michael Kors in the retail sector. Only traders or contrarian investors should even consider looking at Coach. 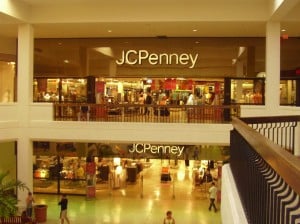 Businesses In The UK By Amount Of Turnover