Jaguar to Build F-TYPE Project 7: The Fastest and Most Powerful Production Jaguar

F-TYPE Project 7, the latest model in Jaguar’s acclaimed F-TYPE sports car range, is set to make its debut at the 2014 Goodwood Festival of Speed on 26 June.

F-TYPE Project 7 is the first Jaguar performance vehicle from Jaguar Land Rover’s Special Operations team, and will be produced in an exclusive, limited-edition run of up to 250 units. Its distinctive roadster body, introduced in concept form last summer, pays tribute to one of the most famous and iconic racing Jaguars: the three-time Le Mans winning D-type, which in 2014 is celebrating its 60th anniversary year. F-TYPE Project 7’s name pays homage to Jaguar’s seven outright Le Mans wins.

The 2014 Jaguar F-TYPE Project 7 is not only the most focused derivative of the award-winning F-TYPE range, but is also the fastest and most powerful production Jaguar ever built. 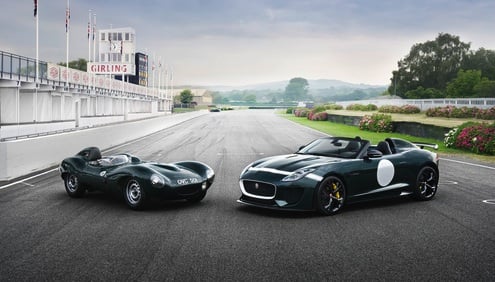 While F-TYPE Project 7 features performance-focused engineering by Special Vehicle Operations – the engineering and vehicle division of Special Operations – its design has been kept true to the head-turning lines of the original Project 7 concept, which was unveiled last summer.

Key design elements include the D-type-inspired fairing behind the driver’s head, shorter windshield, new front bumper, and downforce-increasing aerodynamic modifications – including a carbon-fibre front splitter, side skirts, rear diffuser and adjustable rear spoiler. However, the single-seater concept has been transformed into a two-seater, with rollover hoops for both driver and passenger now integrated into the design.

"Special Operations exists to develop a suite of products and services that enable our most discerning and enthusiastic customers to indulge their passion for our cars. F-TYPE Project 7 is a perfect example of one such product. It's the most powerful production Jaguar ever built, and pays homage to Jaguar's seven outright Le Mans victories with distinctive design cues inspired by the Jaguar D-type which celebrates its 60th anniversary this year."

♦ Jaguar will produce the F-TYPE Project 7 in an exclusive run of up to 250 units, hand-built by Jaguar Land Rover’s Special Operations team

♦ A fully road-legal two-seater roadster, the new car stays true to the design ethos of the Project 7 concept unveiled in 2013 – which paid homage to Jaguar’s seven Le Mans wins – including the distinctive D-type-inspired fairing

♦ CCM brakes, Torque Vectoring by Braking and race-inspired seats are all standard features

When is the best time to move on in your career?