Jane Austen to feature on Bank of England banknotes

Commenting, the Governor said: “Jane Austen certainly merits a place in the select group of historical figures to appear on our banknotes. Her novels have an enduring and universal appeal and she is recognised as one of the greatest writers in English literature. As Austen joins Adam Smith, Boulton and Watt, and in future, Churchill, our notes will celebrate a diverse range of individuals who have contributed in a wide range of fields.”

The Austen note will be issued as a Â£10 note, within a year of the Churchill Â£5 note, which is targeted for issue during 2016.

Features of the design on the reverse of the Jane Austen note will include:

* The quote – “I declare after all there is no enjoyment like reading!” from Pride and Prejudice (Miss Bingley, Chapter XI).

* An illustration of Miss Elizabeth Bennet undertaking “The examination of all the letters which Jane had written to her”– from a drawing by Isabel Bishop (1902-1988).

* The image of Godmersham Park. Godmersham was home of Edward Austen Knight, Jane Austen's brother. Jane Austen visited the house often and it is believed that it was the inspiration for a number of her novels. 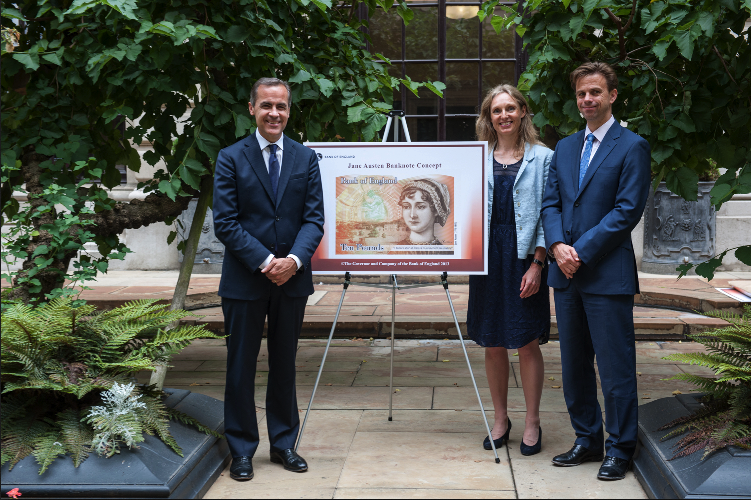 Review of process for selecting characters to appear on banknotes

The Bank regularly changes the design of its banknotes to address issues such as counterfeiting and quality. As part of its programme of issuing new banknotes, the Bank has the honour of celebrating the contribution of great Britons and has included historic figures on banknotes since 1970. There is a wealth of talented people across a range of fields and, over time with the rolling programme, we seek to commemorate some of these.

The Bank announced in April that Sir Winston Churchill would be the historical figure to appear on the next Bank of England banknote. While there was general support for Churchill’s inclusion on a banknote, concerns were also raised that, if he featured on the Â£5 note there would, in the absence of further changes, be a lack of female representation on our banknotes. We know that the public have great pride in Bank of England banknotes and that there is much interest in the characters that are featured. We acknowledge the concerns that have been raised recently about the diversity of characters on the notes, and would like to provide reassurance that, as part of the rolling programme of note launches, it was never the Bank’s intention that none of the four characters on our notes would be a woman. The Bank continues to be mindful of the need to ensure that our notes represent a diverse range of characters, both now and in the longer term.

In the light of recent concerns, and in order to ensure that our notes represent the full diversity of British people, the Bank has decided to review the approach to, and criteria for, selecting characters to appear on banknotes. The Bank’s Court of Directors discussed this at its meeting on 17 July, and agreed to the Bank’s plans to undertake a review. The purpose of the review, which will be overseen by Chris Salmon, the Bank’s Executive Director for Banking Services and Chief Cashier, is to refine the criteria for character selection, and establish a process to ensure that potential candidates are consistently judged against those criteria. In particular we will review:

a. The principles that guide the choice of historical characters, given the need for the choices to command respect and legitimacy.

b. How the process for choosing characters could ensure, and be seen to ensure, the delivery of those principles.

The Bank will also review whether it can take further steps to operate within the spirit of the Public Sector Equality Duty when deciding on future characters.

Commenting on the review, the Governor said: “We believe that our notes should celebrate the full diversity of great British historical figures and their contributions in a wide range of fields. The Bank is committed to that objective, and we want people to have confidence in our commitment to diversity. That is why I am today announcing a review of the selection process for future banknote characters.”

If members of the public would like to provide feedback as part of the review, they can do so via the Bank’s website where an email address for comments is supplied (banknotecharacters@bankofengland.co.uk). The Bank will announce the conclusions of the review by the end of the year.