January 2014 Annuity Rates from The Annuity Bureau by JLT

Standard Level annuity rates: There was no change to the provider positions this month despite all providers changing their rates.

Standard RPI Linked annuity rates: Again, the provider positions remain unchanged this month with Legal & General leading the way for Single Life, with an income of (£3,054.00). Despite Standard Life reducing its rates by 0.83% (£24.00pa) it remained in second place. Aviva gained ground with an increase of 1.63% (£45.48pa) for its Single Life rates and remain a close third to Standard Life. This is a similar picture to Joint Life RPI Linked annuities with Legal & General slightly lowering its rates by 0.03%, while Aviva increased its by 0.7%. Canada Life made the biggest increase of 1.56% (£37.92) for its Joint Life rates, but this could not move it from fourth place.

"2014 is set to be a big year for the annuity market as the industry is getting some much needed attention from the regulators and the Pensions Minister. Fundamental to their concerns is the continual lack of knowledge around how the retiring public can get the best income from the pension pots that they have accumulated during their working lives.

"There can only be one ‘top rate’ for each individual so, when approaching retirement, it is imperative to shop around and use the open market option to find ‘your’ top rate; which invariably is not going to be the provider you have historically saved with. As part of this process, honesty really is the best policy; you must disclose any medical conditions, no matter how small or how little they impact on your life. For example a person with mild type 2 diabetes, could boost their annual income by 9%.

"As demonstrated this month, rates do change month on month, so it’s also important to make sure your illustrations are up to date, giving you an accurate picture of the retirement income you are able to secure from your pension pot."

For more information on the latest annuity rates or retirement services please contact The Annuity Bureau on 0845 072 6774 or visit www.annuitybureau.co.uk. 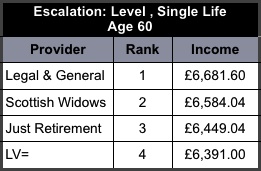 How long will it take to pay your debt off?