The jobs market is at its healthiest since 2008 following a record surge in new positions being made available by employers from nearly all sectors of UK plc, yet salaries remain static.

The latest Reed Job Index, which is compiled using data from over 10,000 employers, shows there were 8% more opportunities on offer in May than in April. Annually, the growth in new positions stands at over 17%.

There were more opportunities for jobseekers in over 90% of the UK’s employment sectors last month compared with April, with one in four sectors making over 10% more jobs available. On an annual basis the average growth in new opportunities for every sector of UK employment stands at 21%, with only three sectors (accountancy, financial services and purchasing) less healthy now than they were in 2012. Among the sectors enjoying the most notable growth were the education and health and medicine professions, both experiencing annual growth of around 60%. The training sector proved the biggest monthly riser, up by 26% compared with April.

The bright picture is mirrored across the UK, with on average 8% more positions on offer in every region compared with last month. On an annual basis, only one region (Northern Ireland) remains behind where it was this time last year. Londoners had 8% more job opportunities to target in May, with new roles in the capital up 14% year on year.

Salary growth remained flat last month with the index dropping by less than half a percent to 98 points, meaning remuneration is at the same level it was this time last year.

“In line with the season, the jobs market has bloomed this spring after steadying in April. We are particularly encouraged by the fact that the majority of employment sectors are showing growth. 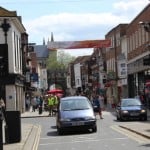 “We believe that a jobs-led recovery is the way forward for the UK economy and, with the latest service sector and house price data starting to indicate the wider health of the economy picking up of late, we are starting to see the tentative recovery very much being led by the buoyant jobs market.

“Looking ahead, it will be interesting to see whether this month’s GDP and ONS figures follow suit. Both measures have recently shown encouraging, if modest growth and there are strong signs the growing health of the jobs market will continue to help drive the economy forward.”

The Reed Job Index is compiled by reed.co.uk, through analysis of job advertisement trends from over 10,000 recruiters throughout the UK tracked against a baseline of 100 established in December 2009. It is the largest month measure of conditions and trends in employment in the UK.

Euro gives up gains as traders trim some Yen positions

Next announces rise in profits

The DJIA Is A Hoax