The Fast Forward Tour kicks off in Dublin

The ever-restless songwriter Joe Jackson travelled the world to record his recent studio album Fast Forward – his first collection of original songs in seven years. The album was released on October 2nd on earMUSIC to a host of excellent reviews and has charted all over Europe. Having been recorded in New York, New Orleans, Amsterdam and Berlin, the artist will return to the latter during his European tour in Spring 2016.

The tour, which kicks off in Dublin on February 5th, 2016, is scheduled to end in Berlin, Jackson's second home, over one and a half months later. The career-spanning shows will feature Jackson "as my own opening act," playing a short solo/piano set before bringing out his full band: long time collaborator Graham Maby on bass, Teddy Kumpel (Rickie Lee Jones, Feist) on guitar, and Doug Yowell (Suzanne Vega, Ari Hest) on drums.

Joe Jackson is currently touring the US, playing in front of sold out venues. 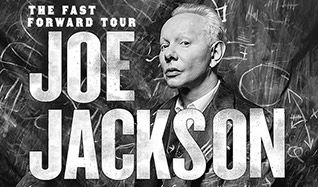