The career and impact of Kenneth Clark (1903–1983), one of the most influential figures in British art, will be explored in Kenneth Clark: Looking for Civilisation at Tate Britain from 20 May 2014. The exhibition will explore Clark’s role as patron, collector, art historian, public servant, and broadcasting impresario, the first to bring the art of the 20th century to a mass television audience. From work by the British artists he championed to highlights from his own eclectic collection, the exhibition of around 200 objects will include works by Henry Moore and Graham Sutherland, drawings by Leonardo da Vinci, prints by Hokusai, and paintings by Constable, Degas, Seurat and Cézanne.

A major focus of the exhibition will be Clark’s patronage and support of contemporary British art. He championed the Bloomsbury Group, the painters of the Euston Road School, and leading figures of the day such as Henry Moore, Victor Pasmore, John Piper and Graham Sutherland. He used his own wealth to help artists, buying works from those he admired and providing financial support, offering commissions and working to ensure their art entered prestigious collections. In doing so he shaped the course of British visual art in the 20th century.

From the outbreak of war in 1939, Clark’s private patronage became a state project through his instigation of several initiatives including the War Artists Advisory Committee. Employing artists to record the war, he commissioned such iconic works as Moore’s Shelter Drawings and Sutherland’s and Piper’s images of the Blitz. In doing so he ensured that the neo-Romantic spirit became dominant in the art of the period. 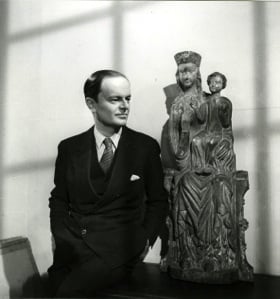 The exhibition will consider Kenneth Clark as a great populariser. His belief in the social importance of art and in everybody’s right of access to art anticipated much of today's culture of accessibility and democratisation of art in museums and galleries. Clark was the youngest and most controversial director of the National Gallery by the age of 30, and founding board member and Chairman of the Arts Council. He became perhaps the first great star of documentary television through his landmark series Civilisation 1969, a series which has influenced arts documentary-making to this day. Clips from this series will be included in the exhibition, as well as extracts from a number of rare TV broadcasts he made in the late 1950s and 1960s.

Clark's role as a collector and scholar, and his impact upon the living artists around him, will be explored through highlights from his extraordinary and eclectic collection of fine and decorative art. He described his collection as the diary of his life, accumulating works from Ancient Rome, Egypt and Tang Dynasty China. His collection of paintings and sculpture included Impressionist masterpieces by Pierre-Auguste Renoir, George Seurat and Edgar Degas; works by Giovanni Bellini and other Renaissance artists; and paintings by such English masters as John Constable and JMW Turner.

Kenneth Clark is curated by Chris Stephens, Curator (Modern British Art) & Head of Displays, Tate Britain, and John-Paul Stonard, independent scholar, with John Wyver, University of Westminster, and Inga Fraser, Assistant Curator, Tate Britain. It will be accompanied by a fully illustrated catalogue by Tate Publishing and a programme of talks and events in the gallery.