The most expensive residential streets in England and Wales remain in the Royal Borough of Kensington and Chelsea, according to latest research from Lloyds Bank. Located in South Kensington, surrounded by fashionable boutiques and with the Victoria and Albert Museum just across the road, Egerton Crescent is the nation's dearest address for the second year running with an average property price of £7,369,0001. Many of these properties are large grade II listed Georgian homes with 4 to 5 bedrooms.

Outside central London, the capital's costliest addresses are The Bishops Avenue in Hampstead which has an average property value of £6,203,000 – the second most expensive in this survey – and Parkside in Merton (£5,212,000) – the sixth priciest street (See Table below).

Exclusive addresses outside the capital….

The most expensive streets away from the capital are mainly in the Home Counties – and generally in Surrey. Properties on Spicers Field in Oxshott in Surrey have an average price of £3,500,000 – the highest outside London. Others include Leys Road also in Oxshott (£3,436,000), Icklingham Road (£3,264,000) and Harebell Hill (£3,080,000) – both are in the Surrey village of Cobham.

Outside southern England the most expensive street is Withinlee Road in Macclesfield with an average property price of £1,871,000 – the 48th most expensive in this survey. Withinlee Road is followed by Ridgeway in Charnwood in Leicestershire – where the average house price stands at £1,671,000. Other exclusive addresses include The Thorsway in the Wirral with an average property value of £1,584,000, East Downs Road in Altrincham (£1,361,000), Rutland Drive in Harrogate (£1,152,000), Torkington Road in Wilmslow (£1,143,000) and Graham Park Road in Newcastle (£1,126,000). 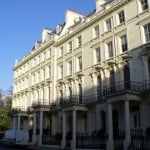 "Unsurprisingly, many of the most expensive residential streets in England and Wales are in the Royal Borough of Kensington and Chelsea with more than half of the 20 most expensive London streets in the borough. Kensington and Chelsea has long had a global appeal and in more recent years the area has attracted many ultra-wealthy foreign buyers. Low housing supply also helps support high property values in this area.

"Across most regions, the most expensive streets are tightly clustered within the same area."

The most expensive street in the North West is Withinlee Road in Macclesfield with an average property price of £1,871,000 – nationally it is the 48th most expensive. The road, so favoured by Premier League football players, is followed by Thorsway in Wirral (£1,584,000); followed by East Downs Road in Altrincham (£1,361,000) and Torkington Road in Wilmslow (£1,143,000). Four of the top ten most expensive streets in the North West are in Altrincham and two are in Alderley Edge.

Yorkshire and the Humber

Fortified schools: doing more of the same and expecting a different result