Kim Kardashian has refuted a slur on her name over a possible prescription pill addiction which could threaten her modelling contracts.

The 31 year old's alleged drug abuse was recently reported in NW Magazine and may be about to cause friction in the Kardashian household.

Apparently Kim's sister, Khloe Kardashian, is rather worried about Kim's use of Valium and sleeping pills and believes she may be in need of professional help.

Khloe has found an empty bottle of pills, which made her draw the conclusion that Kim is self medicating and that there may be anÂ addictionÂ problem as opposed to a singleÂ incident.

Reports Â suggest this would not be the first time that Kim has used drugs. There are numerous articles floating around the internet about Kim self medicating after she broke up with Reggie Bush, but speculation does not necessarily equate to fact.

Khloe has allegedly confronted Kim about the her taking prescription pills and said that if she doesn't stop taking them then she will tell their mother, Kris Jenner and her current boyfriend rapper, Kanye West. 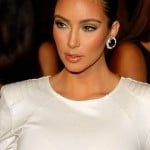 A spokesperson for Kim has said that the reports are untrue and ridiculous.

But Kim Kardashian is the face/body of many products and her modelling career relies on her image, if that image is damaged then there is the potential that modelling contracts will be torn up.

Kim arrived yesterday at Cannes International Film Festival after spending time with Kanye West in Britain where he has been performing.

She did not look happy.

Image by Toglenn (Own work) [CC-BY-SA-3.0 (www.creativecommons.org/licenses/by-sa/3.0) or GFDL (www.gnu.org/copyleft/fdl.html)], via Wikimedia Commons