"Labour In For Britain" Launches Today

The Labour Party’s Alan Johnson will today launch the “Labour In For Britain” campaign to stay in the European Union.

But just like all those people who are for EU membership the first thing he is expected to do is wrongly refer to it as the UK membership of ‘Europe’, not the true culprit the European Union. They do this because of the overall weakness of their argument and they therefore attempt to make out that the issue has a racist element to it that does not exist.

The Labour Party says that Alan Johnson is expected to say “The security of Britain is inextricably linked to staying in Europe”.

He is also expected to go on and say that “Labour will run a distinct campaign to stay in Europe because we believe the challenges of the future are best met by working with others and that Britain is better off in Europe, which brings us jobs, growth and investment.” 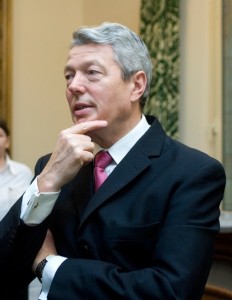 How misleading is that, trying to conflate the continent of Europe with the political construct that is the European Union. Remember that Russia is also in Europe, is he saying that our security is dependent on joining with Russia?

He will also pepper what he says with references to the EU, to obviously try to join the two together in peoples’ minds. This is a highly questionable tactic.

An experienced politician like Mr Johnson should not need to be told that this is wrong and to get his references right.

The press should also not need to be told that they need to hold him to account for this ‘oversight’ as well as make the position quite clear when reporting on it.

This whole debate has always only been about politics and sovereignty, it has never been about dislike of other countries or races – except for those that wish the UK to remain tied to a failing would-be superstate, who keep on trying to turn it into a racist argument.

I sincerely hope that Mr Johnson makes the appropriate amendments to his speech before delivering it. But I will not hold my breath.

Reactions to the ‘re-focussing’ of Funding for Lending Scheme