Labour Party Reforms to Give One Member One Vote for Leader

The labour Party leader, Ed Miliband, wants to reform the way the party leader is selected by basing it on a one ember, one vote basis.

This, he says, will let people back into politics.

At present the leadership election vote is split three ways: trade unions have a third of the votes, MPS and MEPs have a third and then finally the party membership has a third.

The new system would see all members of the party and union members who opt in and pay a fee of £3 to the party being given one vote each.

The leadership candidates would though still be nominated only by party MPs.

With the ‘opt in’ nature of the proposed system Ed Miliband has acknowledged that party funds could take a hit as the old union ‘opt out’ system was replaced.

The Tories have called this a failure as it will tend to entrench union power to select the Labour party leader, not diminish it. This, they say, is because under the new system union members could outnumber ordinary members by up to ten to one instead of being limited to a third of the vote. 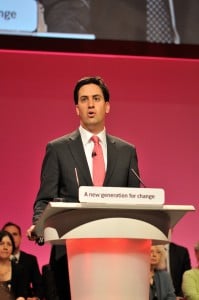 The Tories also say that Len McCluskey admits that Miliband’s reforms would give unions more power, by giving them more discretion over how much to donate In exchange for policy. ‘Yes, we want Labour as a party back in power, but of course it depends on the policies Labour themselves are adopting, and in the context of whether we would give donations that would be determined by my executive and my political committees. It is a collective decision’ he said in the Guardian.

‘Ed Miliband promised to loosen the trade union barons’ grip on the Labour Party. But he has been too weak to deliver.