Successive governments have failed to act, despite weight of evidence, say experts

The failure of successive governments to implement a comprehensive national policy to get UK kids more active and stave off the litany of health and other problems their sedentary lifestyle is storing up for them, is mass “child neglect,” say experts in an editorial in the British Journal of Sports Medicine.

Despite the wealth of evidence showing the immediate and long term benefits of regular exercise in childhood and the expanding waistlines of UK kids, leadership and strategy on the issue “are totally absent,” they contend.

Yet only a third of boys and a quarter of girls in England meet the minimum recommended daily physical activity levels. And one in three kids leaving primary education is obese, most of whom will become obese adults, they warn.

Indicators of child health in the UK lag behind those of other European countries, prompting serial calls for the prioritisation of physical activity in schools, where children spend most of their time—sitting down for up to eight hours a day.

“Despite the well accepted benefits of physical activity and the recognised importance of schools in delivering the crucial physical literacy and activity opportunities, the erosion of physical education in schools combined with ever reducing play facilities has the opposite effect,” write the authors.

Worse, the amount of school curriculum time children spend in physical education and activity is neither monitored nor known by any educational or regulatory authorities, they point out. And there is no statutory minimum requirement for schools to devote a specific amount of time to physical education.

Despite the 2012 Olympic promises to protect school playing fields, these continue to be sold off, say the authors, and although £150 million has been pledged for each of the next two years to improve the physical education of primary school children, this translates into just £9,500 per school.

The government has allocated £28.4 million for competitive school games, but this approach doesn’t suit all children, and there is some evidence to suggest that it benefits those who least need it—the wealthiest and most privileged, say the authors. 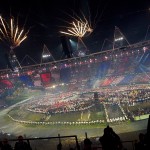 Team GB came third in the medals table at the 2012 Olympics, but the UK also took gold and silver in the European obesity league tables last year, they point out.

“The minimal funding, lack of interest and absence of a child physical activity strategy strongly support the notion that the state is failing to act to prevent harm against children and failing to meet children’s basic physical needs likely to result in the serious impairment of their health and development,” they conclude.

“This is quite literally indistinguishable from the government’s own definition of child neglect,” they explain.

Current and future governments and educational bodies must act to create a comprehensive child-centred national physical activity policy to give children from all backgrounds and sporting abilities every opportunity to be active on a daily basis, they urge.