• Partnership to be used to inspire young people across the globe to pursue careers in engineering, science and technology

• Discovery Vision Concept will be displayed at the New York Auto Show, showcasing the modern design language of the future Discovery family.

Demonstrating their shared vision of pioneering spirit, technological innovation and sense of adventure, the ground breaking partnership will be announced against the backdrop of SpaceShipTwo, the world's first commercial passenger carrying spacecraft, together with Land Rover's new Discovery Vision Concept vehicle.

The partnership will see Land Rover vehicles become part of daily life for the Virgin Galactic team and for all 'Future Astronauts', the space experience will now begin with Land Rover as they arrive in New Mexico for training, and continue to the moment they drive from the space terminal building to the waiting spaceship. Land Rover will base a fleet of vehicles at the Virgin Galactic test centre in the Mojave Desert, California and at its astounding operational New Mexico base, Spaceport America.

The exciting announcement will be revealed in a dramatic fashion on board USS Intrepid, a former aircraft carrier and now a museum dedicated to the exploration of sea, air and space and anchored on the Hudson River. Land Rover's first act as exclusive partner will be to bring a unique full-size replica of SpaceShipTwo VSS Enterprise to New York, where it joined the remarkable British Airways Concorde and its namesake Space Shuttle Enterprise upon the Intrepid. 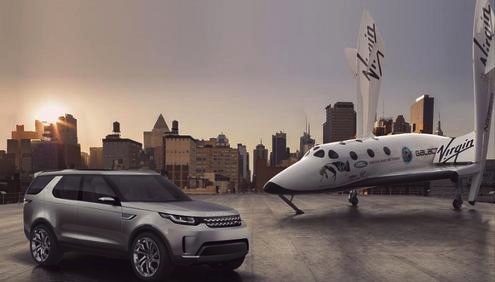 The vehicle uses augmented reality technology to display a 'see-through' view of the terrain ahead, making the front of the car 'virtually' invisible from inside the cabin. Gesture Control allows you to open the doors, operate the indicators or turn on the headlamps simply by moving your hand, while Laser Referencing projects visible markings, symbols and imagery onto the ground to aid low speed or tricky manoeuvres.

The Discovery Vision Concept will be on display at the New York Auto Show on Wednesday 16th April.