• Both the number of homes bought and value are highest since 2007 when £32 billion worth of homes were purchased by Londoners outside of the capital.

• The South of England is the most popular place for Londoners to go, with 88 per cent moving to one of the Southern regions. (see figure 2)

The highest growth was seen in the Midlands and North, where the number of London movers increased by 165 per cent and 90 per cent respectively.

Hamptons International’s latest research, based on Countrywide data, shows that the number of Londoner’s moving out of the capital, buying homes in other parts of the country surged in 2015. 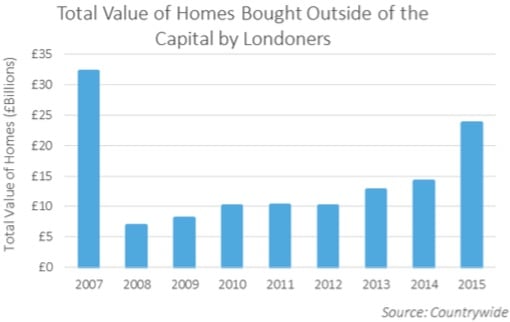 The majority of Londoners moving out of the capital relocated to other areas in the South of England. Eighty-eight per cent of those leaving London bought in the South buying a total of 53,000 homes up from 33,500 in 2014. (see figure 2)

However, the highest growth was in areas further from the capital, particularly in relatively more affordable markets in the Midlands and North of the country. In 2015 the number of homes bought by Londoners increased by 165 per cent, while in the North it increased by 90 per cent.

“As the gap between prices in London and the South East has grown, so has the temptation for Londoners to cash in on record house prices and move out of the capital. With expectations of future house price growth in London easing, many have chosen 2015 to make their move out of London.

“Given the flow out of London was suppressed for many years after the downturn, it is likely that there is still pent-up demand from families waiting to make life stage moves. We will see more Londoners leaving the capital in 2016, many prepared to move further afield in search of value for money.

“It is part of the natural life cycle of the capital that households move out as their priorities change. Many of those leaving London are in their 30s and 40s in search of more space and a different lifestyle. But 2015 saw a large number of first-time buyers moving out too. Affordability in London is more constrained than ever, so many who want to buy their first home are considering less expensive areas in the commuter belt.”