Laser that blinds temporarily to be tested by police

A new shoulder mounted laser that emits a wall of light that could temporarily blind and repel rioters is to be trialled by the police.

This non-lethal device, called the ‘SMU 100, has been developed by an ex commando and will cost about Â£25,000.

This would then be added to the shields, batons, tear gas, Taser, rubber bullets and water cannon (Northern Ireland only at present, but plans to spend Â£4 million on three for the Met are being looked into) that are already deployed for such use.

The laser device can dazzle and even incapacitate what the police call ‘targets’ (people!) as far away as 500 metres and throws up a wall of light with an area of three square metres.

The Daily Mail reports: ‘Paul Kerr, of Photonic Security Systems, the UK-based firm which developed the laser, said the effect was like looking into a low sun on a bright winter day. He added: “It is horrible. It makes you look away.”

Use of the laser would extend the reach of the riot police far beyond the baton and Taser, but would be far less discriminatory.

It is also reported that the police are investigating the use of long range ‘wireless electronic interceptor’ (long range Tasers) and long range chemical irritant projectiles.

And all the while more police officers are being trained to use baton rounds.

It sounds to me like the police (and the government) are expecting more riots. So instead of finding political solutions a more confrontational approach is being adopted. 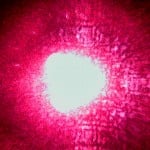 Looking into a laser-Ryan Ebert

There is also the health aspect, surely these devices are powerful enough to make sunglasses ineffective(?), which would make them extremely dangerous one would think.

Then of course there is the old pirates’ trick. They wore eye patches not because they had lost and eye but to protect their ‘night vision’ when going into the dark holds of enemy ships in battle.

So will we see rioters going equipped with eye-patches, adapted sunglasses and laser level safety goggles (like the ones the police will probably be issued with)?

Image by Ryan Ebert from Portland, US (Flickr) [CC-BY-2.0 (www.creativecommons.org/licenses/by/2.0)], via Wikimedia Commons