Standard Level annuity rates: During June rates for Level annuities both on a Single and Joint Life basis rose overall and are now nearly back to levels seen in June 2012.

Of the top four providers, only Aviva left their rates unchanged over the month meaning that they remain in third place. Legal & General stay in top spot both for Single and Joint life having increased their rates by 1.9% to Â£5,324.28 p.a. and Â£4,910.64 p.a. respectively. Canada Life stay in second place and raised their rates by just over 2% but are still paying Â£287.16 p.a. less than Legal & General on a Single life basis and Â£175.76 p.a. on a Joint life basis. In fourth place Prudential’s rates saw the biggest increases of between 4% and 6% displacing Standard Life in the Single life table.

Standard RPI Linked annuity rates: Legal & General also maintained their place at the top in the RPI linked tables increasing their rates by between 1.6% and 1.7% to Â£2,900.04 p.a. for a Single life and Â£2,528.52 p.a. for a Joint life annuity. Canada Life also increased their rates by about 3% but this did not lift them up the tables where Standard Life maintained second place despite leaving their rates unchanged; their income being over Â£100 p.a. behind Legal & General in both tables. As with Level annuities Aviva left their rates unchanged through the month.

Smoker rates: Over the course of the month the smoker annuity market was particularly active, with only Reliance Mutual leaving their rates unchanged the other main providers increasing rates by up to 5.25%. June also saw the entry of Scottish Widows into the enhanced annuity market taking third place in the Single life table with an annual income of Â£5,781.24 p.a. and Â£5,726.16 p.a. for an older couple. Just Retirement increased their Single life rate from Â£6,060.48 p.a. to Â£6,313.44 p.a. which equates to more than Â£5,000 over a 20 year retirement. LV= maintained second place in all tables increasing their rates by 5% over the month; they are only Â£100 p.a. or so behind Just Retirement and it is therefore worthwhile customers shopping around if they smoke and/or have other medical conditions as the final rate given will depend on individual circumstances, which may not match those used to produce the tables.

(All rates based on Â£100,000 Purchase Price, no guarantee period, payable monthly in arrears)

“Gilt yields rose over the month following the anticipated ending of Quantitative Easing in the USA and uncertainty in bond markets. So some providers gradually increased their standard rates but not by as much as the increase in yields due probably to them waiting for the markets to settle.”

“Increases to rates in the market for smoker and other enhanced annuities were much more marked reflecting more the competition amongst providers for business in this area. This can only be good for those who smoke or suffer from medical conditions as it can lead to substantial increases in their retirement income if they get the correct advice and assistance.” 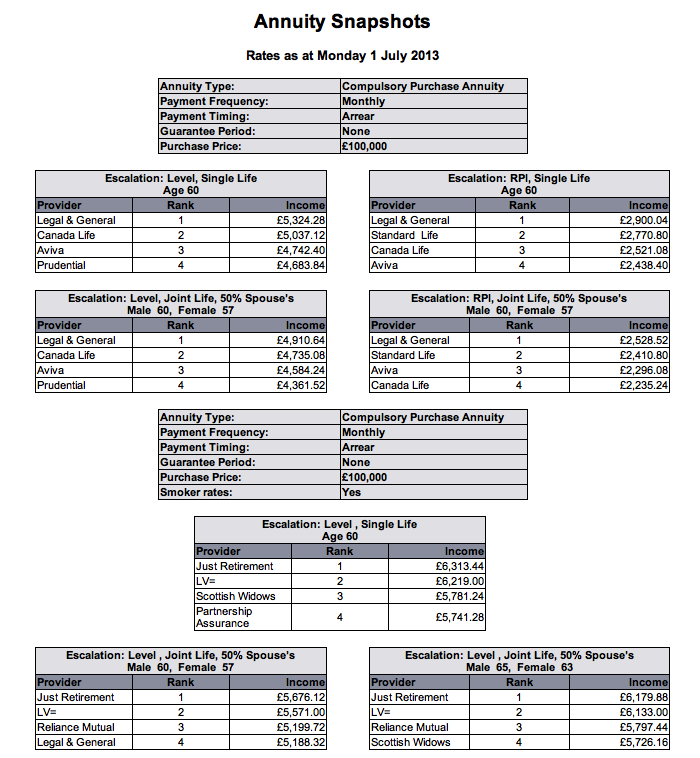 Asset Tracking and Beyond: Tips for Shopping for a Barcode Printer