Standard Level annuity rates: There was no change to the provider positions this month and Canada Life was the only provider to raise their rates and is now paying an extra £70.20pa and £71.04pa for Single Life and Joint Life annuities.

Smoker rates: Enhanced annuities saw some significant changes with Legal & General improving its rates by 1.93% (£126.00) which move it to the top spot for Single Life rates. At the other end of the table Just Retirement was pushed down to forth, after reducing its rates by 1.31% (£84.84pa) in the Single Life table. In fact, Just Retirement reduced both its Joint Life rates by a similar amount, which resulted in its fall to from first place to third and forth in the Joint Life Male 60/Female 57 and Male 65/Female 63 tables. Scottish Widows increased its Joint Life rates by 1.2% and 1.06%, which equates to an extra £69.84pa and £68.52pa respectively.

"The annuity market and the need to shop around for your best annuity rate has, quite rightly, been getting significant media attention in the last month. But what else can those approaching retirement do to boost their pension income? We certainly do not expect individuals to suddenly become investment experts, but it is important to be engaged and keep abreast of changes in the annuity market, especially for those approaching retirement.

"Recent events in Ukraine and Russia is a good example as the socioeconomic turbulence has caused stock markets to fall as investors sold out of equities in favour of safe havens like UK Government Bonds. Insurers purchase Government Bonds to back the annuities they sell so if the price of bonds rises in response to an increase in demand, the insurers will tend to offer less competitive rates. Events around the world can materially impact your options at retirement, and the income you receive.

"In order to mitigate these risks, you should have an appropriate investment strategy in place in the run up to retirement. If your retirement fund is invested in the right assets then the impact of unexpected changes in annuity rates could be reduced. It is also imperative to use the open market option to get the best rates and to make sure that the rates are kept up-to-date right up until a decision is made.

"Provider pricing moved a lot during February so these swings can add up to thousands of pounds lost over your retirement. Most noticeable this month was Legal & General's Joint Life RPI rates where it is paying just over £151pa more than last month – over a typical 20-year retirement this adds up to over £3,000." 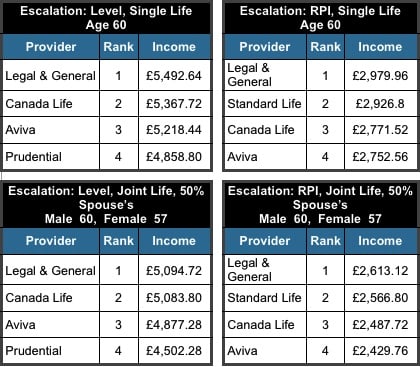 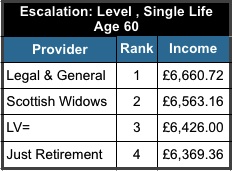