Latest by elections sent a shrill message to our politicians

The message that these latest by elections in Corby, Cardiff and Manchester sends to politicians has nothing to do with ‘Plan A austerity’ or ‘Plan B spending’, it was altogether different.

It tells the story of a population so brainwashed by their Red/Blue divide that they can see nothing else.

OK so UKIP leapt into third place ahead of the LibDems in Corby. But as the next General Election looms nearer expect to see the political norms reassert themselves. And the reason for this? Just as today, most people will vote Tory or Labour with die hard LibDems hoping to hold a balance of power with one of the two main parties.

The people will always revert to type.

UKIP will not be able to hold onto their current popularity. That is unless the party can attack the main two parties and ignite the peoples’ imaginations as hard on broad policies as they do over Europe.

They also have the problem that all the Tories have to do is put out a Euro-sceptic comment or float a Euro-sceptic policy (that they have no intention of following through on of course) for them to capture many UKIP voters.

Then of course there’s the business lobby, to which the opposition leader Ed Miliband kow-towed to today as he backed the concept of ‘Europe’ at the CBI conference. They are more swayed by the call of money and would rather see the UK sink into the EU quagmire if it made them a buck or two. 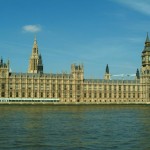 In fact, the whole Eurozone could collapse taking millions of jobs with it and still the Europhile diehards would call for us to integrate further and join the Euro in order to save it. And these Europhile diehards are the majority of the people that the electorate vote for. After all just look at what they do, not what they shout about in public.

I really hope that I am wrong and that Nigel Farage is right when he said during last week’s Question Time that the politics of England is changing. And the glimmer of hope here is that the elections in England and Wales for Police and Crime Commissioners last Thursday did not end up as a Labour landslide, but threw up a whole raft of unexpected independent candidate victories. And with the Tories getting the most maybe it shows where we would be if Scotland did get independence.

We can only wait to see whether this is sustained into a general election, but being a cynic I expect the usual three suspects to consolidate their positions as the election nears. This will of course give us more of the boom and bust and lies we have grown accustomed to, which maybe the real reason why people keep voting for them. After all, better the devil you know.