2013 was another positive year for Prime Central London residential with average prices reaching £1,543,102 at the end of November says Naomi Heaton, Chief Executive of London Central Portfolio Limited (LCP), in the following commentary.

Annual growth was robust at 12.5%, in part due to improving sentiment once much needed clarity was provided following after the Government’s shock announcements in the 2012 Budget.

Although higher stamp duty for properties over £2m came into effect immediately, the proposed introduction of CGT and an Annual Tax on Enveloped Dwellings was delayed to 2013 and rebased to 2012 values. Extensive carve-outs for bona fide businesses such as developers, traders and buy-to-let investors meant there was little negative or lasting impact on PCL in 2013.

Above average price increases can also be attributed to an increased number of Super Prime new build properties being recorded at Land Registry as buyers purchased in personal names, in-line with the Chancellor’s intentions. This included the most expensive sale of the year; £29,350,000 for a leasehold flat in One Hyde Park.

Previously, many of these properties would have been acquired from developers in corporate wrappers and hence missed out from Land Registry statistics. The ‘De-enveloping Effect’ means data needs careful scrutiny in future. The Land Registry figures are no longer comparing ‘apples with apples’ meaning average prices may increase disproportionately.

The year of the ‘Blown Up Bubble’…

Assertions that 2013 was the year of the bubble have been blown out of all proportion. The numbers do not show atypical price inflation, rather an increasingly short-term perspective adopted by many commentators and politicians.

Headline comments demonstrate a lack of knowledge of underlying growth trends in PCL. Rolling annual price growth, the most accurate market indicator as it removes seasonality or monthly volatility, has shown unremarkable growth of 12.5%. This compares with average growth of 9% over the last 40 years. It is way below the 26.1% growth experienced in 2000 – when no analyst even cottoned-on to potentially dangerous price escalation and which corrected itself in due course, without artificial manipulation. 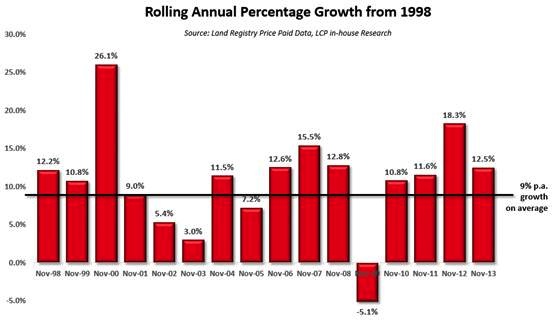 In our 2013 predictions, LCP coined the term ‘Cliff Hangers’ to reflect suspended investor sentiment in the face of increased property taxes in 2012. Once again, there are cliff hangers ahead.

2013 was not all positive news. During his Autumn Statement in December, the Chancellor announced that a much anticipated Capital Gains Tax (CGT) will soon be levied on gains made from the disposal of UK residential property by non-UK residents. Little detail was provided on its implementation but it was made clear that values will be based on April 2015 levels.

Although the introduction of CGT may influence some investors to sell tax-free, the imbalance of supply and demand means that these sales, whilst causing a rise in transactions, will have little material impact on price growth.

The absence of CGT has been a bonus for international buyers, but not a fundamental driver. As a tax realisable only on gains, any damage to sentiment will wash through and it will become accepted as part and parcel of investment into a world class market.

It is also likely that company transfers will be exempt, swinging the balance back in favour of enveloped properties, eroding the impact of the 2012 tax changes.

However, uncertainty may be heightened in 2014 in the lead up to the General Election, in-line with what has been observed in previous pre-election years. With the impending Lib-Dem/Labour Mansion Tax on the cards, the ‘wait and see’ attitude may be particularly evident towards the close of the year.

Nevertheless, with the main market drivers for growth – a safe haven, a financial, cultural and educational centre – are still very much in place in PCL, LCP predict continued upward price appreciation in 2014.

LCP forecast that prices will rise by 5.5% across the year, reaching £1.62m, bringing average price growth back in line with long term trends. This reflects a correction from 2013’s above average growth and any knee-jerk reactions caused by the CGT announcements or pre-election jitters. 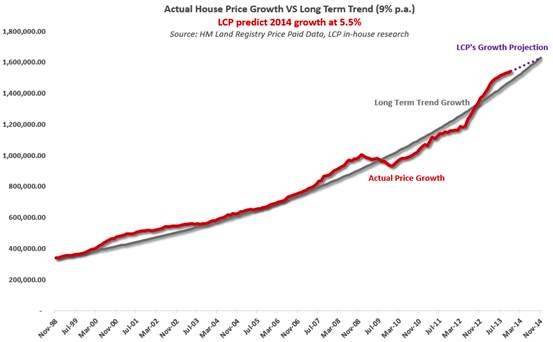 With transactions predicted to increase throughout 2014, and growth set to taper marginally, LCP feel that the year ahead will offer a shrewd buying opportunity for the smart investor. Putting their money where their mouth is, LCP will shortly be launching a number of new residential funds to take advantage of the opportunities that present themselves. As James Goldsmith once said ‘When you see a bandwagon, it’s too late’.