In a massive fillip for Nigel Farage and the UK Independence Party (UKIP) on the eve of the EU elections Ian Wallace, businessman and Labour Party stalwart, has defected to UKIP.

He has made the announcement citing disillusionment with the direction that the Labour party is taking as well as finding himself more and more disagreeing with Labour's policies.

He said that he was particularly concerned over Labour's policies on immigration and Britain's relationship with the EU. 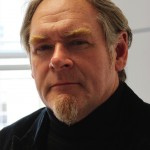 "I have been a member and supporter of the Labour Party since 1979 however, in recent years, I have become increasingly disillusioned by the direction the Labour Party has taken and find myself increasingly at odds with the party's policies across a wide range of issues and in particular the vital issues of immigration and Britain's relationship with the EU.

"Therefore more in sorrow than in anger, I have resigned from the Labour Party.  However, I have recently discovered a new political party more aligned with my concerns and have signed up to UKIP, also joining their Policy Scrutiny Committee.

"I would also like to take the opportunity to encourage other disillusioned Labour Party members and supporters to join UKIP and vote for them on Thursday, and perhaps more importantly, vote for them in next year's General Election as well".