A legal challenge has been launched today (Thursday 10 October 2013) by Friends of the Earth Wales against plans by the Welsh Government to fund a massive £105 million waste incinerator in Cardiff. The action comes as Cardiff City Council and its partners are poised to sign a contract committing the city to 25 years of waste incineration.

“Burning huge mountains of rubbish will not deal with our waste problems – it’s ineffective and an expensive use of taxpayers’ money.

“The Welsh Government must look at alternatives to incineration – recycling creates ten times more jobs and re-using the items we throw away saves money.

“Our concerns are so serious we want a judge to decide whether taxpayers’ money should be pumped in to an outdated incinerator.”

This legal challenge is being brought against the Minister’s approval of £4.2million annual funding for the incinerator because, says Friends of the Earth Wales: 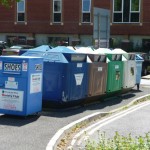 • It was based on a position adopted by the Welsh Government and Prosiect Gwyrdd that unlawfully favours energy from waste plants and subverts the proximity principle.

• It failed to have regard to relevant considerations, or give them sufficient weight, including Welsh Government policy. In particular, Prosiect Gwyrdd has overstated the likely amount of residual waste in a way that makes the case for incineration more favourable and that is in direct contradiction to Welsh Government waste policy. The Welsh Government approved the Final Business Case in full knowledge of both of these facts.

• It was for a type of facility for which the approved facility does not meet the specifications. The proposed facility is a disposal – not recovery – facility, and it complies with neither Welsh Government funding criteria nor with Welsh Government waste policy.