Today's Labour reshuffle by Ed Miliband has delivered Len McCluskey with what the Conservatives are calling his 'dream team'.

And they go on to say that in the process of 'Len McCluskey's reshuffle' the labour leader has once again backed down to his union paymasters and sacked or demoted modern 'Blairites'.

Well known Blairites Jim Murphy, Liam Byrne and Stephen Twigg have all been demoted or sacked continued the Conservatives. Rachel Reeves, who has opposed every single Government welfare reform, has replaced Byrne, a moderate on welfare, at DWP.

Len McCluskey actually called for Jim Murphy, Stephen Twigg and Liam Byrne to be sacked, calling them three of the 'four horsemen of the austerity apocalypse.' 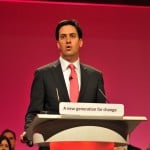 'Len McCluskey is the real winner of this reshuffle. Ed Miliband's purged the moderates and promoted those who want the same old Labour policy of more spending, more borrowing and more debt.

'That's exactly what got us into a mess in the first place And it's hardworking people who would pay the price through higher taxes and higher mortgage rates.