Lending to SMEs is expected to deliver the highest margin growth for banks out of any of their main product lines over the year ahead, reveals research by Interim Partners, a leading global provider of interim executives.

According to Interim Partners’ survey of interim executives working in the banking sector, more than a third (35%) predict that lending to SMEs will see the fastest growing margins over the next 12 months – more than any other type of lending (see graph below).

Interims are senior executives working at or just below board-level who are recruited on a short term basis.

Interim Partners says that the dramatic reduction in lending to SMEs that has taken place since the start of the credit crunch has led to a shortage of credit in the small business lending market and healthy margins.

With the strengthening economy encouraging more SMEs to increase borrowing, it is thought that shortage of supply could mean healthy margins, if demand outpaces supply.

Unsecured personal lending (including credit cards) is seen by senior banking executives as having the next strongest margins with almost a fifth (19%) of interim executives saying this product area will provide the fastest margin growth.

Questions over margins in residential mortgages

Interim Partners points out that although 16% predict that residential mortgage lending will see rapid margin growth – a much higher proportion (30%) believe this type of lending will in fact see the fastest falling margins. As extra capacity continues to be added to this area the concern is that margins will continue to fall.

It adds that lending to larger businesses (along with commercial mortgage lending) are expected to see the weakest margin growth, with just 8% saying these two areas would see the fastest margin growth. 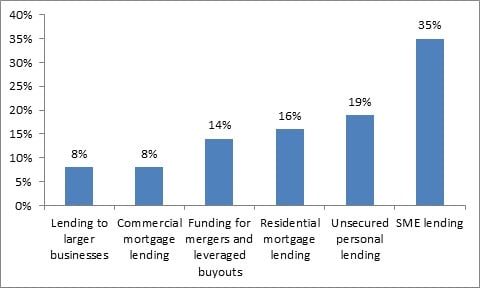 “Clearly banking executives expect that margins within SME lending will be best protected.

“We are certainly seeing more interest in this area from new challenger banks that are freer than the bigger banks to cherry-pick the more attractive parts of the market.”

She adds, “If interest rates do increase within the next 12 months, this could boost lending margins across the board.”

Interim Partners’ research also found that interim executives believe that lending more is now the most important strategy for banks to pursue in terms of benefitting the broader UK economy. More than half (51%) put this top – seeing it as more important for UK plc as a whole than banks building up their balance sheets (35%) or investing more in compliance and risk (14%).

“Banks have worked hard to rebuild their balance sheets,” says Angela Hickmore. “But senior executives in this market feel it is now time for a shift in emphasis to loosen the purse strings a bit more and provide the increased finance to sustain the recovery.”

Interim Partners’ research also reveals that prospects for jobs growth in the investment banking sector are seen as the lowest of any major sector in the financial services industry.

Just 3% of interim executives expect investment banks to be the biggest creators of new jobs this year, the same proportion as in the insurance sector, and only 5% think hedge funds and private equity will generate the biggest increase in jobs in the coming year

The overwhelming majority (71%) think retail and commercial banks will be the biggest creators of financial services jobs in the next 12 months, followed by asset managers (18%).

“The fact that hardly any interim executives expect there to be a recovery in the jobs market for investment banking this year is quite surprising,” says Angela Hickmore. “It suggests that this area of banking is still out of favour despite the improved results from many on the investment banks.”

Retail and commercial banks are also expected to see the biggest pay increases for interim executives, with 47% expecting to see highest growth in daily pay rates in this area, followed by investment banks (31%).