• The over 50s are more likely to know, talk to and count their neighbours as friends than under 50s

• Younger people, who say they would like to know their neighbours better are encouraged to get to know them this Christmas.

People across the country are being urged to use the festive season as a way of getting to know their neighbours, with research by Saga Home Insurance showing younger age groups in particular barely know the people they share a postcode with.

The research shows that while almost 60% of under 50s will pop a Christmas card through their neighbours’ mailboxes, less than one in ten are likely to sit down for a cuppa and mince pie.

That’s in sharp contrast to older generations with 45% of over 50s counting the people next door as good friends. The over 50s seem to be at the heart of neighbourliness, often lending a hand to take in parcels 94%), putting the bins out (58%) and watering the plants for their neighbours (37%).

Although the research also reveals that this is not the way people want it to be – a third of under 50s actually wish they could get to know their neighbours better, to be able to have a chat across the garden fence or to help out when needed. Indeed being friends with neighbours can improve your home security if you are out at work all day or going on holiday you can be confident that someone will keep an eye on your home for you.

“The over 50s are much better at neighbourliness: they feed pets, put out the rubbish and know their neighbours name. It's bred in the bone – or rather it grows across the garden fence. In my area friendships now seem to start with neighbours taking in each other's' parcels when the postman calls. The over 50s are good at this as more of us are at home in the daytime. Without wishing to become a postal depot, I love it when the young mums or dads drop round to pick up their Amazon parcels with a gorgeous baby on their arm, and you can imagine how many parcels get delivered at this time of year! 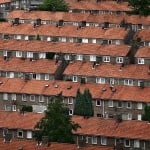 Get to know your neighbour

"But Christmas is a great excuse for everyone in my street to get together and I must admit, some of the best parties I've ever been to are the Christmas parties that my neighbours have thrown because they have a mixture of ages and it’s just a short walk home.”

Saga Home Insurance offers the following tips on getting to know your neighbours:

Hand deliver a Christmas card or, better still, one with an invitation to drop round for a mince pie and a glass of something warming

Send a card even if you don't know your neighbours name, just address it their house number. Acts of kindness like this encourage people to talk

Don't hesitate to ask a favour: neighbours like to help, and older neighbours especially love to know they are useful.

CHART OF THE WEEK: Fiscal Effect of Immigration