Levy Forecast says that US stocks are 'hardly cheap' but equity prices could still be headed higher in the near term, but also that one of the most popular justifications for current equity valuations is fundamentally unsound.

Economist Srinivas Thiruvadanthai, writing in the December (2013) Levy Forecast, said that many of the “common arguments seeking to rationalize present valuations are flawed,” and that most sound indicators show that “valuations are at the top of the range outside of the bubble decades of the 1990s and 2000s.”

Dr. Thiruvadanthai, managing director and director of research at the independent Jerome Levy Forecasting Center (www.levyforecast.com) pointed out that with so many metrics out there, there is a wide range of opinions about market valuations, from historically undervalued to extremely overvalued. Yet not all of these metrics are valid.

(1) It compares what is effectively a real asset (equities) with an asset having claims on nominal flows of income (bonds),

(2) It compares a risk-free asset with a risky asset, especially problematic at present because at low interest rates “the risk premium increasingly dominates the discount factor on risky assets,” and because

(3) “In today’s low-growth environment, the spread between the yields on equities and bonds should be wider than in past periods of higher growth, reflecting the lower premium paid for growth.”

“Our own preferred indicators suggest that the market’s current valuation is historically elevated although well shy of peak levels,” he added. 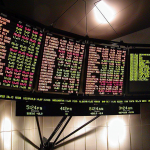 In summary he wrote, “The low current yields on equities imply a longer payback period and require investors to place more weight on their evaluation of the distant future at a time when the future is increasingly risky.”

Nonetheless, valuations may head higher still. “Paraphrasing British economist and investor John Maynard Keynes, the market can remain richly priced a lot longer – and probably get dearer – before it becomes cheaper,” the Levy Forecast, the nation's oldest newsletter devoted to economic analysis, said. It concluded, “Given our outlook, the market is more likely than not to keep climbing in the near term.”

The longer-term outlook is less sunny, according to the Levy Forecast. “Given that the secular retrenchment in private sector balance sheets is far from over, we expect valuations to become significantly lower over the next several years.”

The Levy Forecast’s conclusion: “Long-term investors should be wary.”