Legal & General's latest Job Security Index shows that the number of UK workers who believe they are at immediate risk of redundancy has halved from 6% in January 2013 to just 3% in October. This gives a glimmer of hope for a more positive outlook for workers as we approach the New Year, despite the fact that confidence in job security is still low.

Male workers are more confident than female workers, with nearly three quarters, (74%) of men confident about their job security, compared with 70% of women – based on the latest results in October 2013. Male workers have also seen a 2% increase in confidence over the course of the year, with 72% of male working adults saying that they were confident about their job security in January this year, compared to 74% in the most recent Job Security Index results.

So although confidence in job security in 2013 has on average been 2% lower than 2012 across the year, the workers surveyed believe that the pressure on their job security has actually eased. With workers starting to feel slightly more positive, this could mean that the outlook for job security in 2014 could be more promising than that experienced in 2013.

Last month's ONS Labour Market Statistics showed that the number of unemployed people in the UK fell by 48,000 to 2.47 million between July and September this year and if this month's figures show another fall, as anticipated, then this could be the first signs that the tide has started to turn. 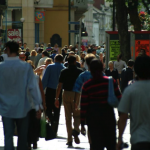 "However, the latest ONS data suggests that there are more people in jobs, so workers' actual employment situation is improving. This may be the glimmer of light that is needed to see confidence in job security improve more in 2014.

"Our Job Security Index data shows that the number of UK workers who believe themselves to currently be at risk of redundancy has fallen to an Index low of just 3%. Let's hope that this more positive outlook will continue into the New Year, and that a sustained economic recovery will instil increased confidence in job security for UK workers for 2014."

Legal & General offers short-term income protection called Lifestyle Cover Insurance, which is designed to provide a monthly percentage (up to 65%) of a customer's gross income for up to 12 months , to help pay their mortgage or rent, household bills and other regular expenditure should they be unable to work due to accident, sickness or involuntary unemployment. Customers wanting further information may go to www.legalandgeneral.com/lifestyle, call 0800 197 2351 or contact their normal financial adviser.