The foreign exchange sector reacted positively on the news from the MPC minutes that Mark Carney and the rest of the Monetary Policy Committee voted unanimously against more QE at their last meeting.

"The new governor turning the previous 6-3 vote into a solid 9-0 against adding to QE, and omitting any forward guidance on interest rates, is probably the best possible outcome for sterling in the short-term.

"However, the minutes do suggest that in August we could still see Mark Carney pull something unexpected from his tool kit in what would be a markedly different approach to that of Mervyn King.

"The pound has perhaps been oversold and certainly overstretched in recent weeks. This news provides hope for sterling bulls that Carney will not take a dramatic or game-changing approach to monetary policy and dilute the value of the British pound.

"If Ben Bernanke takes a more dovish approach to his session in Washington later today, we may have seen the bottom of the market for sterling and a climb higher from here.

"This is good news all round – improvement in wage growth is particularly welcome as this has been a key point of weakness in 2013.

"It is also great to see unemployment claims well down once again, even if the economically inactive are growing.

"Clearly the upturn in the PMI surveys in recent months is filtering down into the UK labour market."

And on the MPC minutes he said: 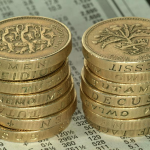 "The fact Carney seems to have drawn a line under the QE debate is a major plus point for the pound.

"Clearly Carney has unconventional measures up his sleeve but the removal of QE from the table is a major development and one the market was not positioned for.

"As the Carney revolution continues, we are now looking for more forward guidance on interest rates in August, perhaps tying the rate outlook to a unemployment or growth levels."

“The unanimous vote in favour of no more QE is quite a turnaround from previous months, with both Paul Fisher and David Miles having jumped ship in July. But this is inconsistent with the narrative in the minutes, which report that some members still believe that more stimulus is needed.

“The Committee will be announcing its assessment of the merits of forward guidance and intermediate thresholds in August. This appears to be the rationale behind the change in the voting pattern, with the implication that this could be a substitute for QE.

“It seems pretty clear that we’re not going to see any change in stance at the August meeting, but we would hope that the Inflation Report clears up some of the uncertainty and gives us a steer as to where policy will move to in September.”