Loans to businesses slump in the UK

According to research by a leading global accountancy network the value of loans to businesses in the UK has dropped by 13% since the collapse of Lehman Brothers in 2008.

UHY Hacker Young says that the amount of outstanding loans to UK businesses has dropped from $775 billion in December 2008 to its current level of $673 billion. The only major economy to fare worse was the USA with a drop of 16% (table at foot of article).

This puts the UK in 18th place out of the 22 G8 and key emerging economies that UHY Hacker Young looked at, despite the efforts of the coalition government to get banks lending to businesses.

In contrast the BRIC nations of Brazil, Russia, India and China have collectively boosted lending to business by some 62%.

Even countries with struggling banks like Italy and France have managed to increase their lending. Although Ireland’s lending has plummeted a colossal 42% in the last three years.

This graph shows the percentage change in lending to business since 2008 for all the 22 countries surveyed. 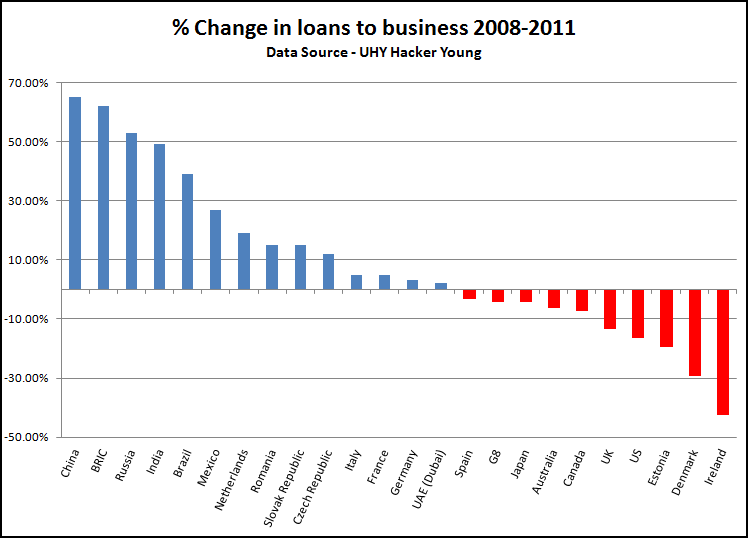 Loans to Business-click to enlarge

As can be seen many EU countries, including Romania, Czech Republic, Slovak Republic, the Netherlands, Italy, France and Germany have posted a significant increase in lending to businesses, despite the impact of the Eurozone crisis on the liquidity of European banks

A recent report, the SME Finance Monitor, commissioned by the banks says UHY Hacker Young, showed that 40% of first time business loan applications were rejected with only three in ten being offered ‘what they wanted and took it’.

Ladislav Hornan, Managing Partner of UHY Hacker Young, the UK member of UHY comments: “Lending to businesses has become one of the most hotly debated issues during the financial crisis. The risk is that businesses – particularly SMEs – are being starved of competitively priced funding as a result of the shrinkage of the banking sector.

“Among the G8, only U.S. banks have shrunk their loan books faster since the onset of the credit crunch. The concern for UK businesses is that with banks reluctant to lend, they are unable to invest and be internationally competitive.

“The four BRIC nations have seen their lending to businesses grow at the fastest rate. While part of that growth is driven by higher inflation, it still shows the gulf in performance between the UK and faster growing economies.”

“Lending to businesses, particularly small businesses, is a key barometer of economic prosperity. Small businesses are the engine of economic growth, but starved of fuel in the form of credit it can be difficult for them to move up a gear, expand and create jobs. In an increasingly globalised world, if a small business cannot expand to fulfill an order, that order can be lost to a better financed overseas competitor.”

“Small businesses are hugely reliant on bank financing as, unlike larger corporates, they are usually not able to raise money through bonds or share issues.”

“The pace of deleveraging among many European banks – in comparison with American, British and Irish banks – has been painfully slow. This probably explains why lending to businesses in countries like Italy and Spain has increased, albeit not in real terms.”

“Four years after the banking crisis and lending to UK SMEs is still falling. The challenge for the UK Government is to show that it can play a major role in reversing this trend.” He added.

Commenting on Russia’s pre-eminence in lending to business within the G8, Nikolay Litvinov partner of UHY Yans-Audit LLC in Russia, a member of UHY, said “The potential for growth of business credit in Russia remains high. Lending to businesses displayed improvement even during the global financial crisis. It is related, in many respects, to the financial stability achieved by cooperation between the state and the banking sector, as well as stable growth of Russia’s economy. Like other BRIC countries, Russia hasn’t got any preconditions for reduction in the scope of business credit.

“The recent commodities boom has insulated Russian from the full force of the global financial crisis. The Russian economy, though suffering a financial crisis in 2008/09, has recovered quite strongly since then. This has fuelled appetite for debt among Russian businesses and enabled well-capitalised Russian banks to meet that demand.”

While Alan Farrelly, partner of UHY Farrelly Dawe White Limited in Ireland, a member firm of UHY, commenting on Ireland’s position at the foot of the league table said “The Irish government has pumped more than â‚¬60 billion into the banking system over the last four years. The purpose of this money was to save the banks from collapse, but now that the immediate crisis has been averted, the Government needs to ensure that more of this money finds its way into the economy.” 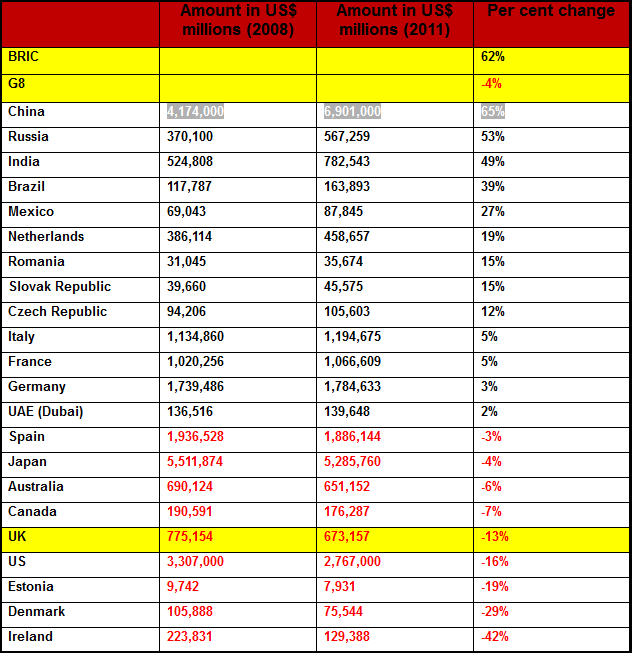 Loans to Business-click to enlarge

How To Get a Better Company Credit Score

Bank of England Action Against Lloyds and Bank of Scotland