The London Green Party says it has announced its dynamic and diverse list of 8 candidates who will stand in next May’s elections for the European parliament.

The list, publically announced following a series of internal hustings and elections, will represent the party at the polls for the European Parliament due to take place next year on May 22nd. Top of the list is Jean Lambert who has been a Green Euro-MP for London since 1999.

“It’s very exciting to have such a passionate, dynamic and diverse team of candidates – each bringing with them different skills and experiences. Of course having a current Member of the European Parliament at the head of the list puts us in a strong position but I’m also looking forward to seeing the whole team represent the Green voice in the lead-up to the 2014 elections.”

Current Green Party MEP for London and number one on the party list Jean Lambert said:

“I’m delighted to be standing again as the Green candidate for London. Myself and my Green colleagues in the European Parliament have working hard at the European level, fighting on issues such as combatting poverty, reform of the banks and air pollution. If elected I would be honoured to continue that work on behalf of Londoners and the Green Party.”

Caroline Allen, the Green Party spokesperson on animals and number two on the list said:

“We believe the population of London deserves better. It deserves fairer wages, more affordable housing, and greener spaces. The Green Party’s MEPs in the European Parliament have already done sterling work helping to make this vision of London a reality. By electing more Greens to the European level the alternative, progressive voice for London will be heard loud and clear.” 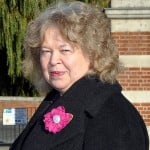 As a practicing vet, Caroline also has extensive knowledge of animal issues and has campaigned on a wide range of subjects from tackling irresponsible pet ownership to opposing the badger cull, highlighting the cruelty of greyhound racing to protecting wildlife.

“I’m looking forward to using this election as a chance to raise the voices and concerns of ordinary Londoners. We have a wonderfully vibrant city and it is vital that the varied interests and concerns of the city’s population – whether that be jobs, housing or transport – are raised and tackled at a European level. The Green vision for London is a positive one and one I am proud to represent.”

The elections for the European Parliament will take place on May 22nd next year. In total 73 members of the European Parliament will be elected to represent the United Kingdom. After Jean, Caroline and Haroon the other members of the London Green Party list of candidates are Shahrar Ali, Danny Bates, Tracey Hague, Violeta Vajda, and Amelia Womack.