Comedian Ben Van der Velde, a campaigner against Camden Council's draconian busking policy, has been selected to stand for the Green Party in Camden Town with Primrose Hill ward in May's local election.

Van der Velde will be challenging three ward councillors (two Labour, one Lib Dem) who all voted to introduce one of the harshest busking policies in modern UK history against Green opposition in November. Under Camden Council's new scheme unlicensed buskers across the entire borough of Camden face a criminal record, fines of up to £1,000, the seizure of instruments in the streets and the forced sale of musical instruments to pay fines after 28 days.

"Camden Council have elected to criminalise busking and turn otherwise law-abiding musicians into pariahs", said Van der Velde. "It is a sad day when local government manages to legislate against the right to play music in public freely. Let buskers continue to help the public walk down the high street with a little swing in their step and a bop in their legs."

Explaining his decision to stand as a Green candidate, Van der Velde, said: 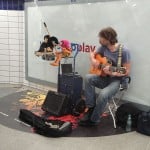 "The Green Party understands the diverse nature of modern life and the powerful force that diversity can be when correctly channeled. It's emphasis on a society focused on improved equality and the cultivations of positive health, education and transport services for all, regardless of background, makes it the only true progressive party."

"Van der Velde and the Keep Streets Live Campaign to protect street performance is in step with the Green way of thinking which is very strongly supportive of creative and artistic activity and of allowing people as much freedom as possible to develop these aspects of themselves, and indeed to make a livelihood in this way."

Van der Velde's selection comes ahead of a High Court hearing on February 27 and 28 of a legal challenge brought by the Keep Streets Live Campaign, which is asking a judge to quash the contentious policy.