Measures have been announced to improve cycle safety in London.

The Department for Transport (DfT) and TfL will strengthen the enforcement of HGV standards by dedicating more Vehicle and Operator Services Agency (VOSA) and Metropolitan Police officers to this activity in the capital. They will establish a dedicated London-based industrial HGV task force to raise awareness of safety requirements for vehicles and drivers and to take enforcement action against the minority of dangerous operators, vehicles and drivers. This will complement existing work by the Metropolitan Police with TfL funding to improve road safety and cycle safety in London, including the enforcement of advanced stop lines and to fine cyclists who jump red lights, promoting safer behaviour by all road users.

Under national legislation, most HGVs, such as supermarket delivery lorries, are required to be fitted with safety equipment such as sidebars or low skirts which protect cyclists and other vulnerable road users from being dragged underneath the vehicle in the event of a collision.

However, a small number of vehicle types – particularly those operating in the construction sector – are exempt from fitting certain safety equipment. The rising number of such vehicles in London's building boom present a risk to the growing number of cyclists, who now make up almost a quarter of all rush hour traffic in the centre.

TfL and Crossrail procurement conditions already require that exempt vehicles are fitted with such safety equipment. Through a combination of contractual conditions and action taken by responsible operators, it has been proven possible to install safety equipment such as side guards as standard to construction related vehicles in London without a negative impact on operations.

Transport Minister Stephen Hammond therefore also announced today (4 September 2013) that the DfT will review exemptions to current vehicle regulations, which mean some construction and waste carrying lorries do not have to be fitted with side guards. They will also review the way regulations applying to specialised mobile equipment such as volumetric concrete mixers and mobile cranes are enforced.

"The government is committed to improving the safety of cyclists and other vulnerable road users. Today's (4 September 2013) announcement of a dedicated Industrial HGV task force will target the small minority of large goods vehicle operators who are unaware of, or just wilfully non-compliant with, safety regulations for HGVs and their drivers. I have also committed to review vehicle regulations to ensure there are no unjustified exemptions from safety standards and, together with the Mayor, will press the EU to improve vehicle safety designs as soon as possible." 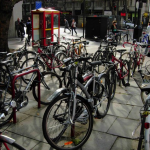 Bicycles in London by Stephen McKay via Wikimedia Commons

Both the minister and the Mayor will continue to press for improved vehicle design through active engagement with vehicle manufacturers and the EU. This will look to improve the visibility of cyclists from lorry cabs, including cyclists at the front and on the nearside of lorries. They will also work with training providers who deliver Bikeability training to promote better cyclist awareness of lorries, as well as with training providers and the road freight industry to help further improve driver training.

The Mayor will also ask Londoners for their views on whether he should use his powers to levy a substantial "safer lorry charge" on any HGV which is not fitted with basic safety equipment to protect cyclists. TfL will consult on this proposal, partly modelled on the successful low emission zone, before taking any decisions.

"I have long been worried that a large number of cyclist deaths involve a relatively small number of problem lorries which are not fitted with safety equipment. In my cycling vision in March, I said that no lorry should be allowed in London unless it is fitted with equipment to protect cyclists. After a lot of work behind the scenes, we have today (4 September 2013) taken the first steps to make this a reality."