Protests are planned in London against the TTIP trade deal between the EU and the US on Saturday 11 October, as part of a day of simultaneous protests in hundreds of towns and cities across Europe.

Protestors will hold a rally in London’s Parliament Square, and will suspend a banner from Westminster Bridge reading, ‘Hands Off Democracy: #NoTTIP’. Several hundred people are expected to join the demonstration.

A Europe-wide petition launched this week (Tuesday 7 October), calling on the European Union to drop the deal, already has more than a quarter of a million signatures.

Protestors in Edinburgh will stage a ‘TTIP Deal or No Deal’ game on Saturday, while protestors in Bristol and Leeds will run ‘TTIP Tours’ of public services threatened by the deal. 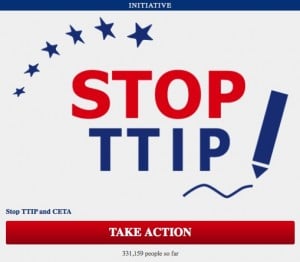 David Cameron is pushing hard for the TTIP (Transatlantic Trade and Investment Partnership) deal, despite growing public concern that it would threaten democracy, slash food safety and environmental standards, and bring increased privatisation of the NHS and education.

The most controversial part of the deal is a proposal to allow multinational companies to sue governments, including the UK government, over decisions they believe might reduce their profits – a plan that campaigners say would undermine democratic decision-making.

“The TTIP deal would give big business an unprecedented degree of influence over government decisions on all aspects of life in the UK. Democracy is about what’s best for everyone, not what’s best for the world’s richest and most powerful corporations. The TTIP deal is a hijack of democracy, and we need to stop it.”