London Underground has been named as one of the most improved brands of the past year. The network, which celebrates its 150th birthday this week, has been named in YouGov’s Â annual Brand Index list as one of the UK brands that experienced the greatest rise in BrandIndex Buzz during 2012.

BrandIndex Buzz is a composite score based on the percentage balance of people who reported hearing good versus bad news about a brand.

YouGov’s figures show that the public’s perception of the tube deteriorated in the lead-up to the Olympic Games, but then began to rise shortly after London 2012 began. On 27 July, the day of the Olympic opening ceremony, the Underground’s Buzz score stood at -12, but by the time of the closing ceremony, on 27 August, it had risen nearly 50% to -6.7. The public’s impression of London Underground continued to improve after the Olympics and during the Paralympics, reaching its highest point of the year of +9.5 on 3 September.

Commenting on the findings, YouGov BrandIndex Director Sarah Murphy said: “As London Underground turns 150 we are seeing a marked improvement in the way the public views the network. I think the reason for its improvement in our rankings is partly because it set pretty low expectations for how the tube would work during the Olympics and Paralympics, and then greatly exceeded them. I think most people who were in London for the Games would agree that the tube ran remarkably smoothly, and this has created significant positive sentiment for London Underground for the first time since tracking began.” 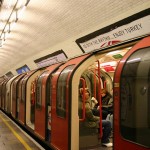 Meanwhile, a separate YouGov poll asked Londoners to list their top transport peeves. Not moving down inside a carriage came top (38%), closely followed by people who play loud music on their headphones (37%).

The YouGov survey also found there are large disparities between what annoys men and women. More than four in ten (42%) women are irked by people not moving down inside the carriage as opposed to a third (33%) of men, while littering is a pet peeve of more than a third of males (34%) but just over a quarter (27%) of females. People making public transport run late is a gripe of just under a quarter of women (23%) as opposed to just 14% of men.

How The Economic Machine Works by Ray Dalio