Routes 507 and 521 will trial the new buses as the technology is particularly suitable for busy short commuter services which operate between Victoria, Waterloo and London Bridge stations.

The trial will help TfL develop plans for greater use of electric buses in central London in the future, supporting the Mayor's vision of a central London Ultra Low Emission Zone.

They will become a familiar sight to passengers on routes 507 and 521 when they enter passenger service tomorrow (Thursday 19 December). 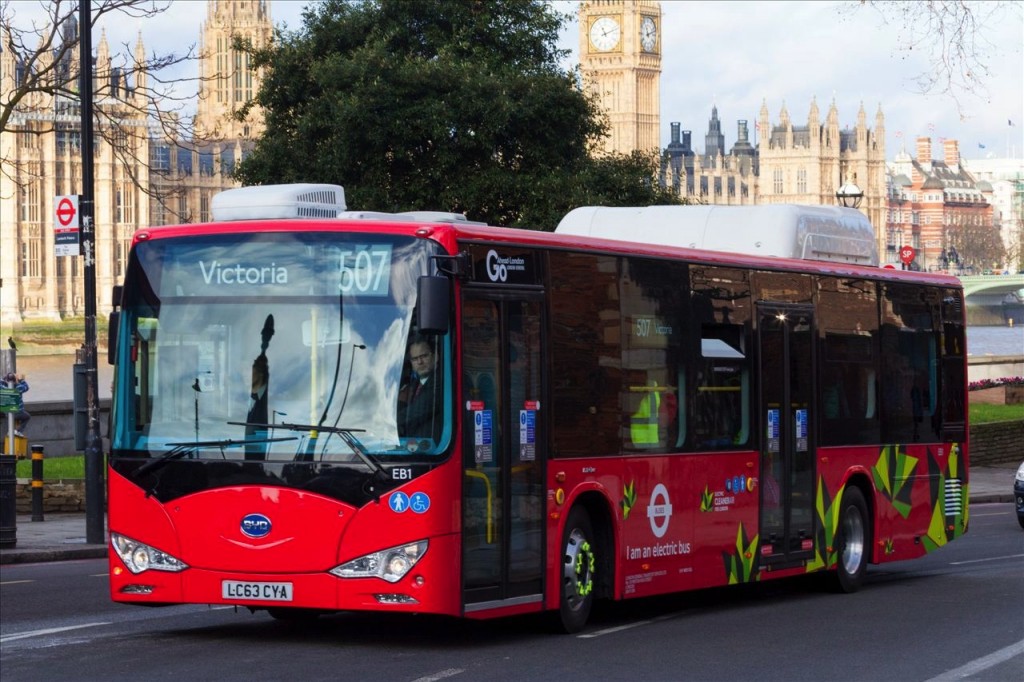 Matthew Pencharz, Senior Environment and Energy Advisor to the Mayor of London, said:

'If these prove successful we plan to see more introduced over the next few years to run alongside the hybrid and hydrogen bus technology that is already tackling air pollution and carbon emissions across the Capital.'

'We will be closely monitoring the performance of these vehicles while they are being trialled here in London.

'Should the performance and reliability of these buses meet London's challenging requirements, this could be a very important step towards adopting this new clean technology in the Capital.'

'We are delighted to be partnering TFL and BYD on this exciting new project to run the first electric buses on London's streets.'

'We are convinced that widespread adoption of the BYD ebus could have a dramatic effect on lowering pollution levels in major cities so this development in London, one of the world's top cities, is of tremendous importance.

'We look forward to a long and positive relationship with Transport for London and Go-Ahead London and to further deliveries of our market leading products in London and other UK cities.'

The trial will be used to establish whether the technology can stand up to the rigours of operating in an intense urban environment such as London.

The manufacturer's tests demonstrated a potential running cost saving of around 75 per cent compared to a diesel bus.

The buses take around four to five hours to fully charge overnight and should have a range of 250km, which would be sufficient to operate these buses for a full day on these routes without the need to recharge.

In addition to the two buses in this trial, six additional electric buses will be introduced into the TfL fleet in early 2014.

Four of the buses were secured with funding from the Department of Transport (DfT) Green Bus Fund with a further two funded from TfL's technology demonstration budget.

The electric bus trial is one of the many measures the Mayor has introduced to make London's bus fleet more environmentally friendly, including the operation of zero emission hydrogen buses on Route RV1 between Covent Garden and Tower Gateway and delivering Europe's largest hybrid bus fleet.

Around 600 hybrid buses now operate on the capital's roads, including the New Routemasters, with more being introduced in a rolling programme.

By 2016 there will be more than 1,700 hybrid buses in service on London's streets representing 20 per cent of the total bus fleet.