Looking for Hints on Where the Global Economy’s Headed? Watch These Stocks

You can learn a lot about the welfare of the global economy by looking at global bellwether stocks such as FedEx Corporation (NYSE/FDX), MasterCard Incorporated (NYSE/MA) and Visa Inc. (NYSE/V). These are the companies that tend to ebb and flow along with the action of the global economy, so I generally follow them as a benchmark for some of my market analysis.

FedEx just reported its fiscal 2014 first quarter (ended August 31, 2013) that saw the delivery company beat the Thomson Financial consensus earnings-per-share (EPS) estimate by $0.03 per diluted share. Revenues expanded at 1.9% year-over-year. In my books, the revenue growth, while acceptable, does not suggest a boom in the global economy. The global economy is progressing along at a steady rate.

For 2014, FedEx is predicting EPS to expand at a rate of seven to 13% year-over-year. The estimate is based on U.S. gross domestic product (GDP) growth of 2.1% and 2.6% growth in the global economy. The assumptions are more or less in line with the Organisation for Economic Co-operation and Development (OECD) and International Monetary Fund (IMF) estimates, suggesting that the global economy will continue to grow at a moderate pace in 2014.

The positives of the moderate growth are that inflation likely won’t play a major factor and central banks around the world will maintain their record-low interest rates.

Now, if the assumptions are correct, I would expect the jobs market to improve and corporate revenues to rise, which are two key areas in my view. The U.S. GDP grew at 2.5% in the second quarter, so it looks like the expected growth is on target. 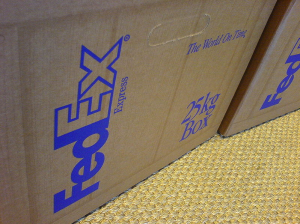 With this in mind, the official unemployment rate used by the U.S. Department of Labor could decline towards the seven-percent level and below in 2014, where we could begin to see speculation of interest rates edging higher. The Federal Reserve said rates will remain status quo until the unemployment rate falls to 6.5%, which likely won’t happen until late 2014 or 2015.

For the global economy, the key will be the progression in China and Europe. If China can drive its domestic consumption, and if Europe and the eurozone can recover from their recession, then we could see a rise in the growth in the global economy and the United States.

A key component to the growth will be consumer spending. Keep an eye on credit card companies such as MasterCard (set to report on October 28) and Visa to get a sense of this.

If the projections pan out, I would expect the stock market to edge higher in 2014, but driven more by stronger revenue and earnings growth than the easy money policies.

Time to Take a Page Out of the Almanac This Winter?