Looking for the Next Oil Boom? Follow the Tech

Much larger than Eagle Ford and once thought to have reached peak production, new technology has brought us full circle back to the Permian Basin in Texas and New Mexico, where the recent shift to horizontal well drilling has rendered this play the unconventional ground zero.

Determining where the next real oil boom will be depends largely on following the technology, and while the Permian Basin has been slower than others to switch from vertical well drilling to horizontal drilling, horizontal has now outpaced vertical, and investors are lining up to get in on the game.

Until about 12 years ago, virtually all wells in the Permian were vertical. As of last fall, however, horizontal and directional rig counts—meaning, non-vertical drilling rigs—have now begun to exceed vertical, according to RBN Energy.

But what they’re also looking for are developers who are seeing strong economics in both vertical and horizontal wells. It’s all about balance, and this co-mingling of multiple zones, with the ability to complete both horizontal and vertical wells economically is the best bet for investors.

The Permian Basin now boasts the top rig count in the US. Just this week, the number of rigs exploring for oil and natural gas in the Permian Basin increased by to 560, according to the weekly rig count report released Thursday by Houston-based oilfield services company Baker Hughes.

What’s more, according to Bernstein Research, the Permian Basin will top the charts for North American spending growth in 2014, with an amazing 21% increase. And 2013 was already a stellar year for the Permian.

Permian production last year increased by 280,000 boe/d to 2.3 million boe/d, comprised of 1.4 million b/d of oil and 5.3 bcfd of gas, according to the US Energy Information Administration.

This technology has changed the way we think about the Permian Basin, once the darling of American oil production and then lost in the shadow of Eagle Ford and Bakken. While Eagle Ford and Bakken were viewed as the “bigger plays” at the start of the unconventional boom in the US due to the fact that new technology debuted here harder and faster, the Permian is back and it’s bigger than ever. 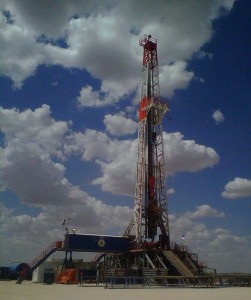 “The Permian Basin is much larger than the Eagle Ford play, and it also contains over 20 potentially productive zones, while Eagle Ford has only one zone,” Parker Hallam, CEO of Crude Energy—a small-cap company, not publicly traded, operating in the Permian, told Oilprice.com.

“The Wolfcamp is one of the better producers in the Permian. It can be up to 1000 feet thick and is composed of multiple individual zones, several which could be production. Wolfcamp is attracting a lot of attention right now because of the horizontal drilling through the normally tight limestone,” he said.

Hallam also noted that while horizontal drilling is changing the future of the Permian Basin, “vertical completions using new technology like fracking and co-mingling multiple zones are turning out top results and drillers are seeing strong economics in these wells.”

Leading the pack in the Permian are Devon Energy Corp., Concho Resources, Pioneer Natural Resources and Chevron, with Wolfcamp probably the key focus of development activities, and the leading formation in terms of production increases. Devon in particular is being singled out by analysts [1] for its large acreage in the Permian, couple with its transformative turnaround that could render it one of the largest crude oil producers in the US.

The only challenge with the Permian—which is on trend to see continual increases in production—is the pipeline takeaway capacity, according to RBN Energy. “The bottom line is that crude oil production in the Permian is growing rapidly, and today there is not enough pipeline takeaway capacity to efficiently handle the volume”, but that should correct itself soon with new pipelines coming online.

Bloomberg quoted Bruce Carswell, West Texas operations manager for Iowa Pacific Holdings, as saying that the forecast through July is that volumes are going to continue to move out of the region by rail.

The Permian Basin Petroleum Index, put out by Amarillo economist Karr Ingham, which examines several industry metrics to measure the health of the oil and gas business in the region, was almost 10 percent higher in May than a year earlier.

Regardless of pipeline capacity, Permian Basin crude is shaping up to be the next big oil boom thanks to new technology. Eagle Ford and Bakken became economical only after being drilled horizontally, so with the final shift to dominate horizontal drilling in the Permian, the game has only just begun.