TheCityUK has announced that the former Trade and Investment Minister, Lord Stephen Green of Hurstpierpoint, has been appointed as the new Chairman of its Advisory Council.

Lord Green will replace Sir Win Bischoff as Chairman of the Advisory Council from 1st June 2014. The Advisory Council of TheCityUK brings together the leading figures across UK-based financial and professional services. Its members comprise the leaders of the largest and most influential businesses in the sector, including the leading banks, insurers, asset managers, law firms, consultancy and audit practices. With the other members of the Council, Lord Green will be responsible for ensuring the senior practitioner voice is heard on the issues that determine the competitiveness of the financial and related professional services sector.

"The industry owes a great debt to Sir Win Bischoff for establishing TheCityUK. Without his natural authority, integrity, and vision, it would not have been possible. It is a hallmark of the success of TheCityUK that we were able to attract someone with Lord Green's credentials to succeed Sir Win. We all look forward very much to working with Stephen as the organisation continues to grow its influence here in the UK, in other EU member states and internationally." 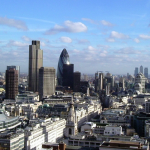 "I have been very impressed with the way TheCityUK has established itself over the last four years. It does a great job representing the rich tapestry of firms from across the whole of the UK that make up the industry, and has brought to life the reality that London is Europe's financial centre. I am looking forward to working with the team to champion the sector's competitiveness in the UK, the EU and the international arena. It's a great honour to take over from Sir Win Bischoff who has led the Advisory Council with such distinction."

"TheCityUK has over its relatively short life become an authoritative and influential voice for the combination of financial and professional services that make such an important contribution to the UK economy and to Europe. Lord Green is the ideal Chairman of its Advisory Council to build on the foundations created over the last four years."

"We are delighted that Lord Green has accepted our invitation to help steer TheCityUK and deliver the next stage of our strategy. This is a hugely positive move for the future of the organisation. Our Advisory Council has become the authoritative body of the financial and related professional services industry, and one which Lord Green is ideally placed to lead."

Lord Green was the Group Chairman of HSBC Holdings plc from 2006 until 2010, when he stepped down to take up his ministerial role. He retired as a minister in December 2013.

Oil Megaprojects Won't Stay On The Shelf For Long