The 15% fall in dietary salt intake over the past decade in England is likely to have had a key role in the 40% drop in deaths from heart disease and stroke over the same period, concludes research published in the online journal BMJ Open.

But average intake across the nation is still far too high, warn the authors. And much greater effort is needed to curb the salt content of the foods we eat, they insist.

Dietary salt is known to increase blood pressure, which is itself a major risk factor for heart disease and stroke.

The authors base their findings on an analysis of data from more than 31,500 people taking part in the Health Survey for England for the years 2003—when initiatives to curb population salt intake began across the UK—2006, 2008, and 2011.

This survey involves a random representative sample of the adult population of England living in private households, and includes information on diet and blood pressure measurements.

The average population salt intake was calculated from urine collected over a 24 hour period in almost 3000 people who were part of the National Diet and Nutrition Survey between 2003 and 2011. This survey involves random samples of the population.

During this period, nationally collated figures show that stroke deaths fell by 42% while deaths from coronary heart disease dropped by 40% in England. 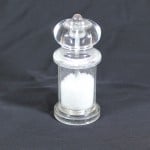 With the exception of increasing weight gain, all these trends, along with better treatment of cardiovascular disease and its risk factors would have probably contributed to the dramatic falls in stroke and heart disease deaths, explain the authors.

But daily salt intake fell by an average of 1.4 g during this period, amounting to a drop of 15%. And among those not taking blood pressure lowering drugs, average blood pressure still fell by 2.7/1.1 mm Hg, even after taking into account other influential factors.

Salt intake was not measured in this particular group, but the substantial fall in salt consumption in the population samples suggests that the decrease in blood pressure would largely have been attributable to less dietary salt rather than to medication, say the authors.

And previously published research suggests that the contribution of blood pressure lowering drugs to population falls in blood pressure is relatively small, they say.

The authors caution that they used several sets of data, involving different people, so were not able to track changes at the individual level, nor were they able to account for physical activity levels.

And they go on to say that despite considerable progress, 70% of the adult population is still eating more than the recommended 6g/day, with 80% of intake coming from processed foods.

“Therefore, continuing and much greater efforts are needed to achieve further reductions in salt intake to prevent the maximum number of stroke and heart disease deaths,” they urge.

Neonicotinoids and the decline of bees