All the voters who were going to vote for Craig Mackinlay in South Thanet (or those that have already cast their postal ballot in his favour) must be feeling sickeningly let down right now.

The decision by the Crown Prosecution Service to progress with charges against the Tory candidate for expenses irregularities regarding the 2015 general election has fatally damaged his campaign, whatever his party leader, Theresa May, says.

Craig Mackinlay is a de-facto ex-candidate, he belongs on the perch of a Monty Python dead parrot sketch!

Why would anyone now risk voting for him with a realistic chance that he could spend the first few months of his tenure battling in court for survival instead of helping his constituents. He could even end up at Her Majesty’s pleasure forcing a by-election. Yet another example of Theresa May’s lack of judgement (and that of his local party branch) in allowing him to stand in the first place. 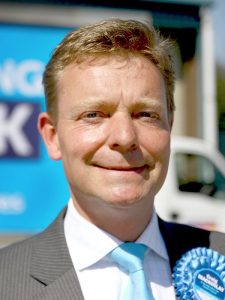 Now what we need to see is all the Conservative voters putting country above party and getting behind the UKIP candidate, Stuart Piper.

Nigel Farage has said that he will be in the constituency tomorrow in support of the UKIP candidate. Expect fireworks there for the last few days before polling day.

“Am I pleased that these charges have been brought? Yes, but I believe there should be more people being charged due to what looks like wholesale electoral fraud by the Tories in recent by-elections and during the last election.

“What it means now it will be a straight fight between Labour and UKIP and I will be in Thanet tomorrow to support our excellent candidate.”

"It would be unprecedented and clearly inappropriate for voters to be asked to support a candidate facing serious criminal charges relating to the conduct of the previous election in their own constituency.

"The allegation here is that the voters of Thanet South were cheated of a fair contest in 2015 by Craig Mackinlay and others.

"Given that, the honourable thing for Mr Mackinlay to do would be to stop campaigning on his own behalf and recommend instead a vote for the remaining Brexit candidate on the ballot – the UKIP candidate.

"In this election UKIP has put our country before our party in many constituencies. In Thanet South, Mr Mackinlay should put his country before himself."

"We endured a lot during the 2015 campaign: death threats, assaults, and a huge, cross party, concerted attempt to keep Nigel Farage and UKIP out of parliament.

"Well, the bully boy tactics of the political establishment seemed to succeed, but today the truth is emerging about the Conservative Party's candidate Craig Mackinlay and Tory expenses.

"This of course has massive ramifications at a local level, but on a national level, people will seek clarification from the Prime Minister. After all, it was Theresa May's chief of staff who was involved in the 2015 South Thanet campaign.

"What did Theresa May know, and when?

"What assurances can the PM give that the Tories are not doing the very same thing at this election?

"Up and down the country people will be watching to see if Mrs. May has any integrity and acts to suspend Nick Timothy from her team. If not, how can anyone trust her to be the strong and stable leader Britain needs?"

Stan and Malcolm write to the PM