Despite Easter being the most important Christian festival, which commemorates the crucifixion and resurrection of Jesus Christ, most Christians in Britain and several European countries surveyed by YouGov will not be attending church services over the Easter weekend.

According to YouGov’s latest EuroTrack poll, which tracks public opinion in Britain, Germany, France, Denmark, Sweden, Finland and Norway, just under a quarter (24%) of British Christians plan to attend church services on Easter Sunday, and only 5% say they will go to church on another day around Easter. 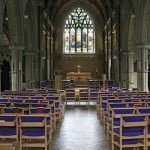 Meanwhile, 46% say they will eat at least one large chocolate Easter egg, compared to 48% who say they won’t eat any and 5% who are undecided. Just over a quarter (26%) of Brits say they will stop at eating one Easter egg, while 16% plan on eating two or three.

More than eight in 10 (82%) Brits say that chocolate eggs should only be sold in the run up to and around Easter, while only 8% say they should be sold year round and 10% aren’t sure.