Most people think that Pope Benedict XVI and leading Catholic bishops have not been influential in their societies, according to YouGov’s latest EuroTrack survey, which tracks public opinion in Britain, France, Germany, Denmark, Sweden and Finland.

Benedict XVI, who announced his resignation because of “lack of strength” on 11 February, will officially cease to be the head of the Roman Catholic Church tonight at 8pm.

Asked how much notice they think leading politicians have paid to the views of Pope Benedict and Catholic bishops in their respective countries, and a majority of people in every country surveyed say either “not much” or “none at all”.

In Britain, 71% say Pope Benedict has not been influential, while only 9% say he was and 21% are undecided. Amongst British Roman Catholics, 78% say politicians have not paid attention to the views of Pope Benedict, while 17% say they have and 4% aren’t sure. In predominantly Roman Catholic France, 61% of people believe the Pope has not been influential compared to 18% who believe he has been, and 21% who are undecided.

Also, a majority of people in every country except for Germany say leading politicians in their respective countries were right to not pay much notice to the Pope’s views. In Germany the public is divided with 43% believing the Pope should have been listened to, 40% saying he should have been ignored and 16% undecided.

In most of the countries surveyed by YouGov people tend to have a more positive than negative view of Benedict’s performance during his eight years as Pope. However, questioned on specific issues, ranging from allowing women priests to homosexuality and birth control, and either a majority or plurality of people tend to agree that Pope Benedict has been “too conservative and changed things too little”. 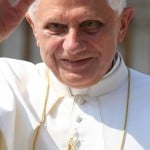 Strong majorities of people in every country surveyed say the Pope was right to resign. Support for the Pope resigning was highest in Germany, at 82%, and lowest in Britain, at 68%, although only 8% of Brits say Benedict was wrong to resign and a quarter (25%) are undecided.