Sir Bernard Hogan-Howe, the Metropolitan Police commissioner, called for the hard-line approach to drugs when talking to MPs on Monday.

He went on to say that those that fail the tests should lose their jobs but not always be handed over to the police.

Quoted in the Express he said: "It seems to me we have got to plant in people's minds something to affect the demand as well as supply. You can think of many occupations where if you were working with a colleague you would want to be sure in fact that they were drug free."

He wants to see testing for all professions, especially those in teaching, transport and intensive care nursing, which seems to reasonable on the face of it. After all who wants their bus driver high on dope?

Already members of the armed forces for example are subject to random compulsory drug tests (as are the police), where whole units are isolated and no-one allowed out until they have given a sample.

But could civilians be made to do the same in the face of human rights laws and the protection in law that no-one should be made to incriminate themselves? 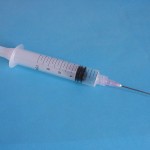 Then there is the concept of the presumption of innocent until proven guilty. This move would assume that all professionals were guilty and the burden would be on them to prove themselves innocent by providing a clear sample.

And what would happen if, far from being a small minority, it turned out that many more people than we imagined were active drug takers? Now that would be a bit embarrassing wouldn’t it?

One also wonders if MPs should be made to submit to regular testing for alcohol and drug abuse before extending it out to the more ordinary person. In fact, why aren’t all applicants to elected posts made to give a sample before being allowed to stand?

Image of Syringe from WikiMedia Commons

VCT Sector Set for More Inflows Over the Next 12 Months