The Deputy Prime Minister Nick Clegg yesterday called for innovative ideas from key players in the automotive industry to help the UK stay ahead of global competition and secure our position as global leader in ultra low emission vehicles.

The call comes following the government's announcement of a £500 million investment to drive a low carbon revolution.

The investment, which the government announced in June, will be used to support the growing market between 2015 and 2020 and is one of the most substantial packages of support for ultra low emissions vehicles in the world. It will be used to support electric cars and other vehicles that produce almost no carbon, creating jobs and boosting economic growth, as well as tackling climate change and air quality issues.

"The UK's automotive industry has undergone a renaissance in recent years and we have the potential to emerge as a trailblazer in the development, design and manufacture of green cars.

"We're doing well compared to our European competitors, helped by a buoyant UK car market. But, if we're to stay ahead we need to secure the UK's position as both a global leader in the production and adoption of low carbon vehicles. We need to see more people who live in Britain driving these cars and enjoying the lower running costs they can bring.

"The job now is making sure that we get the most out of every penny, so today (7 November 2013) I am launching a call for evidence from key players in the industry to find out how we kick start demand and make the UK the number one European destination for investment in ultra low emissions vehicles."

The additional £500 million will build on the £400 million the government has already committed from 2010 to 2015 to take low emission vehicles from a niche to a mainstream market – with support to increase plug in points, boost consumer interest, and strengthen research and development. 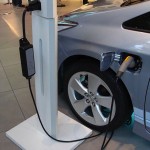 A thriving auto sector is vital to the UK economy – it is currently worth over £11 billion to our economy and represents seven per cent of all manufacturing output. A strong foothold in low emission automotive technologies will be vital to its ongoing success.

The UK already offers one of the most long-term, comprehensive packages of support for consumers looking to make the transition to ultra low emission vehicles and we want to make sure that this reputation is maintained and enhanced over the next period.

The call for evidence is seeking opinions on where emphasis should be placed and if particular areas, for example taxis and fleet vehicles, should be targeted more directly. Government is inviting industry, local authorities, fleet managers and others with an interest in this sector to respond to encourage more people to choose vehicles with the lowest possible emissions.

It builds on the government's previous successful package of support that led Nissan to base European production of the world's best selling ULEV here in the UK. It has delivered wider benefits to the sector throughout the supply chain helping SMEs across the country.

Over 6,000 ULEVs have been sold in the UK with government-funded consumer incentives and 10,000 chargepoints installed.

UK is the Largest Supplier of the World's Ivory Markets