The Daily Express reports that researcher Farid Saad PhD of Bayer Pharma said that 255 male volunteers over the age of 40 and weighing an average of 16st and 12lbs lost an average of 2st and 8lbs (16.3 Kg) when injected with testosterone. This equates to a reduction of 3.5 inches (8.9 cm) in waist size.

“The substantial weight loss found in our study, an average of 36 pounds, was a surprise” said Dr Saad.

The study took five years and by the end the men’s average weight had dropped to 14st and 4lbs.

Having looked around the web I found that, in general, increased testosterone has always been associated with both weight loss and masculinity. So I was asking myself ‘what comes first, the testosterone or the weight loss?’ Maybe this study shows that it is the testosterone. Especially as testosterone is mainly produced in men by the testes and eunuchs tend to gain weight quickly and suffer other side effects.

But while aging decreases the level of testosterone it has been shown that not only does resistance training increase levels of the chemical in the body, but that sleep also increases its nocturnal levels. So why the need to inject it? Why not encourage men to naturally increase the levels of testosterone in their bodies by exercise and a good sleep pattern? That is be totally natural about the process.

But of course it is far easier to receive an injection than it is to spend a few hours sweating in the gym every week for the rest of your life. So many men will be more than prepared to needle themselves for the sake of their physical image, even though some argue that it may carry risks with it. But not all of these risks are agreed by everyone.

So what do we do? Once again there is conflicting evidence and opinion. So, just to put my two penn’orth (that’s two pennies worth or two cents worth depending on which country you live in) forget the needles, a proper diet and exercise wins hands down every time. 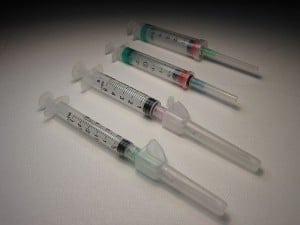 Image by Intropin (Own work) [CC-BY-SA-3.0 (http://creativecommons.org/licenses/by-sa/3.0) or GFDL (http://www.gnu.org/copyleft/fdl.html)], via Wikimedia Commons

IET announces search for the world’s best innovators in engineering, science and technology