Dutch engineer Jarno Smeets built some wings and claims to have become the first man in history to fly just like a bird.

31 year old Smeets says he used his self built wings to travel some 100 metres in about a minute and then landed safely (video below).

“Ever since I was a little boy I have been inspired by pioneers like Otto Lilienthal, Leonardo da Vinci and also my own grandfather” Jarno Smeets Said.

Smeets, together with the independent Human Bird Wings project, developed the wings on an open source basis and there is an associated blog and YouTube channel.

Prior to this it had been assumed that human muscle power could never be utilised properly for self powered flight. But this project uses two Wii controllers, accelerometers from a HTC Wildfire S Smartphone and Turnigy motors, which supply the extra power needed to flap the 17 square metre wings.

Although this sounds very promising, there are however doubts about the authenticity of the project (wired.com/wiredscience/2012/03/human-bird-wings-hoax/). So maybe we're still stuck firmly to our mother Earth. 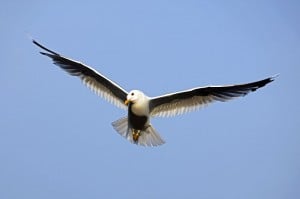 Bird in flight by Bengt Nyman